Radically biblical, but not quite the full picture 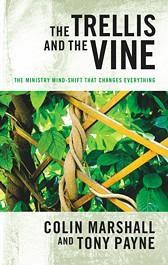 The Trellis and the Vine by Colin Marshall and Tony Payne

This book has been much discussed in the Presbyterian Church of Victoria. One congregation has a reading group which has been studying it, and the METRO committee has given a copy to every minister.

The book has two core ideas. The first is that programs and organisational activity in a church (the "trellis") often get in the way of the real gospel work ("the vine"). The second is that real gospel work involves discipling others.

Now, I need to say at the outset that I am in fundamental agreement with these two emphases. Yet, it must be said that they are emphases only. It is very easy for a discipleship system to become a new trellis. The book's discussion on discipleship, however, is sufficiently nuanced to make it broader than just 1:1 discipling.

There were two things I particularly appreciated about the book. Firstly, Marshall and Payne make the point that the aim of Christian ministry is to "make disciples who make other disciples, to the glory of God," and not, for example, to get more people into small groups. This is very important for me to remember, since I would dearly love to see more people in my congregation join a small group. But that is only a means to an end, and not an end in itself.

The second thing I appreciated in this book was the argument in chapter 9 for investing time in more mature Christians so that they would join in the "vine work". Although a pastor may be naturally inclined to spend time with those who are struggling or those who need to hear the gospel, this book recommends an approach to ministry that trains others to do this - and suggests that the pastor focuses on those who need either the equipping or the encouragement to join you in the work. This is radical and controversial - yet it is the way Jesus carried out ministry, focusing on twelve disciples who would (at a later time) teach and disciple others. This is very different to the way many people view pastors and ministers - yet it is biblical.

The book contains a truly hideous chart on page 101, which contrasts the "pastor as clergyman," "pastor as CEO," and "pastor as trainer." Naturally, the table is skewed towards making the reader approve of the third column and disapprove of the first two. It reminded me of the chart that D. A. Carson included in his Exegetical Fallacies (p. 109 of the 2nd edition). Apparently, the "pastor as trainer" approach sees Sunday as a "gathering of worshipping disciples with their Lord," while the "pastor as clergyman" model views Sunday as a "service of worship," and the "pastor as CEO" looks at it as an "attractional meeting." But surely it is possible to view it as both a "gathering of worshipping disciples with their Lord" and a "service of worship."

Perhaps it would be helpful at this point to draw on a modified version of Mark Driscoll's model of the pastor being prophet, priest and king. Following John Frame, Driscoll has suggested that some pastors are gifted as prophets ("thinkers"), others as priests ("feelers"), and still others as kings ("doers"). The point being, of course, is that we need all three of these aspects in a well-rounded ministry, and we need all three types serving as pastors. Maybe there is something similar going on with the three approaches that Marshall and Payne discuss:

Now, this book upholds the biblical and strategic importance of preaching, and views discipleship as being much bigger than meeting with individuals, but even with the widest possible definition, we can still see more to pastoring and teaching than this.

The second concern I have is that there is more to discipleship than discipling individuals. In Matthew 28:19, Jesus tells his disciples to "make disciples of all the nations," (NASB). Marshall and Payne take the line that "full time Christian ministry" is worthwhile for all people, and that there is a distinction between "gospel work" and "other work." They dismiss the idea that people in secular work are contributing in some way to the growth of God's kingdom, and criticise those who say "we shouldn't call people out of their secular careers; we should encourage them to stay where they are for God's glory" (p. 139). They then assert, "We don't make disciples of Jesus by building better bridges, but by prayerfully bringing the word of God to people."

There are two problems with this idea. The first is that it views the Great Commission as replacing (rather then supplementing or expanding) the creation mandate. The second is that it fails to realise how big discipling the nations really is. To take one example - Bible translation is an important component of discipling a nation. But Bible translation presupposes an entire discipline of linguistics. Would Marshall and Payne also say that "We don't make disciples of Jesus by building better verb paradigms"? Someone involved in linguistics is part of the progress of God's kingdom in the world. The Kingdom of God is bigger than individual disciples - it's about the reformation and renewal of families, churches, societies and nations.

In conclusion, this is a stimulating book, that may well prove to be one of the most influential books of 21st century Reformed evangelicalism.

An excellent review John. Do you mind if I link it to my blog?

Thanks. Col is in town this week (I'm told) so this should be a good talking point.

It might be a day or 2 before I get to linking it. I'm without a computer and don't know how tondo hyperlinks from my phone.

Thanks for the review John I came via Al's link and am impressed and helped by your positive and negative critique.

God bless your work in Melbourne.

Thanks John for this balanced and generously-spirited review - I am a plodding reader with several items on my list so it may be a while before I look at this one - but I am interested in knowing something about this book apparently regarded by some in the PCV as so important that the Assembly must instruct commissioners to read it - I wonder when was the last time that happened?

this is Ben Palmer by the way

The book is effective in making us think clearly about ministry but in the process perhaps it reveals a certain mindset, that narrows the definition of vine-work unnaturally. For example I wondered how visual fitted into Payne and Marshall's conception of "vine-work".

You write:
But surely it is possible to view it as both a "gathering of worshipping disciples with their Lord" and a "service of worship."

Can't it be legitimately viewed asall three; an attractional meeting as well?

This is a side issue but just wondering what you think?