Taking my cue from Lydia, I thought I'd share a few pictures of what I'm thankful for this week: 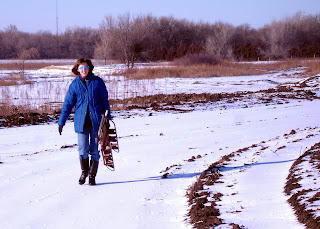 It didn't seem much like winter around here until recently...I guess God wanted to wait and make it a surprise. It has been so nice to bundle into soft, cozy warm clothes and head out for a fast sled ride in the field behind our house. 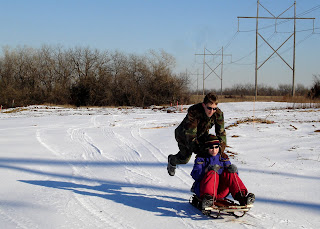 (my brother Matt and sister Tine) 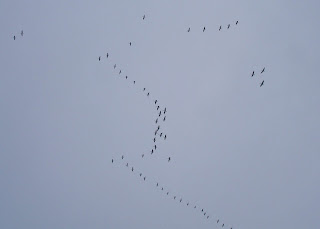 (An interesting formation of geese)

After my dad and brothers shoveled the snow away from our driveway, we were left with large piles of snow: perfect for making tunnels! 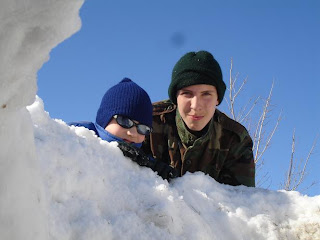 (I took this pic of brothers Tim and Matt from inside our snow cave.)

Hast thou entered into the treasures of the snow? Job 38:22a

88888888
The Picture that isn't here:
I'm a fan of the Calvin and Hobbs comic strip. If you've read any of the books, you know that the creator, Bill Watterson, had some very creative ideas for snowmen! So I decided to make a troop of miniature snowmen to guard our snow fort. I finished eight yesterday afternoon....but by morning they'd melted... before I could take a picture. :-(

Here's a portion of a poem that I found in a magazine once. It's a beautiful description of a winter afternoon:

"The whole sky was blue
And the thick flakes floating at a pause
Were but frost knots on an airy gauze,
WIth the sun shining through."

I don't know if there's more. Has anyone read it before? I'd love to know what it's from!
Posted by Kara Dekker at 1:43 pm 2 comments:

A quick post: What do you want to read this year?

I wanted to post more often. But when I start writing something, I end up going through at least two or three drafts before I'm half-way satisfied. I have several things in the works as I type this....and they're not looking ready yet! I said I wasn't a perfectionist...should I rethink that?!

So. Time for some reader participation. What books do you want to read this year?

Here's what I'm thinking of trying:

The Silmarillion by J.R.R. Tolkien

Getting Serious About Getting Married by Debbie Maken

Till we have faces by C.S. Lewis

Eternity in our hearts by R.C. Sproul Jr.

The School of Obedience by Andrew Murray

Discipline: The Glad Surrender by Elisabeth Elliot
Posted by Kara Dekker at 11:17 am 4 comments:

I’ve been rethinking my goals for this blog. I’ve enjoyed these past seven months of writing almost exclusively on the subject of literature, however, books are not always the first thing on my mind.

While being a bibliophile is a defining characteristic of my life, it is not the only or primary one. First and foremost, I am a Christian girl committed to learning more about God, growing in a deeper relationship with Him, and conforming every area of my life to His will.

I want to be able to share what I learn along this path and be an encouragement to others as I do so. I hope by becoming more personal and varied in my approach to more effectively reach this goal.

I find it an almost humorous evidence of a mind fond of clear-cut boundaries that before changing direction I must make a formal statement of my intentions! Yet there it is.

For those of you who enjoy book reviews, etc-- don’t worry! I doubt I’ll ever run dry on subject matter there. I like this quote by Elizabeth Goudge:

“…When people once begin to read they go on. They begin because they think they ought to and they go on because they must…. They find it widens life. We’re all greedy for life, you know, and our short span of existence can’t give us all that we hunger for, the time is short and our capacity not large enough. But in books we experience life vicariously.”

The focus here at the Biblio-File is not shrinking, but broadening.
Posted by Kara Dekker at 6:07 am No comments:

There has been a lot of discussion recently in Blogland about the making of New Year’s resolutions.

Some enthusiastically champion the practice, lauding the benefit of added focus to their year. Others shun it like the plague, citing the depressed feelings that set in when the resolutions are not kept.

I’m not a resolution maker. The traditional list of New Year’s resolutions has always seemed to me to be a frivolous substitution for true commitment. I don’t want to look back at the end of my life and see a trail of broken promises. I want to be faithful in the things that truly matter, things like building my relationship with God and with people.

This isn’t to say that I don’t have goals and dreams. I do, as the many lists filed in my notebooks will testify. But I want to keep things in perspective. Most of those things are nice, but not top priority. And my brain doesn’t like clutter; I’m not a very good multi-tasker!

Several days ago, I began to think over the past year. It was a hard year, probably the hardest yet of my short life. There were many times when I became so mentally bogged down in troubles that it was hard to do anything else but anguish. Yet whenever things looked blackest, God was faithful to remind me that He was the One in control. I remembered how many times I worried about what people thought instead of what Christ thought. Then I remembered the peace that came when I finally gave things up to God. And almost before I realized it, I’d renewed an old “resolution”: in the words of the hymn-writer, “I am resolved to follow the Saviour.”

I am resolved to go to the Saviour,
Leaving my sin and strife.
He is the true One;
He is the just One;
He hath the words of life.

I am resolved to follow the Saviour,
Faithful and true each day,
Heed what He sayeth,
Do what He willeth;
He is the living Way.

I am resolved to enter the Kingdom,
Leaving the paths of sin.
Friends may oppose me,
Foes may beset me;
Still will I enter in.

I will hasten to Him,
Hasten so glad and free.
Jesus, Greatest, Highest,
I will come to Thee.”