A playful, yet serious, paradox 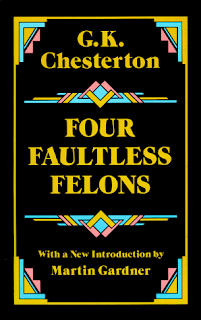 The title is meant to be paradoxical. This is a series of stories about four men who do seemingly criminal acts - attempted murder, fraud, burglary and treason - yet act in perfect righteousness. The paradoxical nature of the book makes it similar to Chesterton's The Paradoxes of Mr. Pond, though it is not quite as brilliant.

Chesterton was a great purveyor of paradox, and his playfulness and wit come through in this volume. Yet there is also a serious point being made. These four faultless felons are being radically counter-cultural. They are turning the world upside down, or at least their little part of it. Indeed, they are shocking in their pursuit of righteousness.

In fact, this book is really a fictional representation of Chestertons's maxim in The Everlasting Man: "A dead thing can go with the stream, but only a living thing can go against it."

I can recommend Four Faultless Felons to anyone. It is also available to read online.