God in the Details

Here's an excerpt from a recent Highlands Study Center newsletter. Mr. Sproul gives a reminder that God is truly in control of all. This is something I know intellectually but often fail to live up to...and thus need to be continually reminded!

God in the Details
I’m on hold as I type. I’m waiting to find out if my riding mower is fixed. After eleven years of faithful service, my previous mower finally went the way of all flesh. In February (see how prudent I am, buying in the off-season?) I bought a new mower, and an expensive warranty. During my fifth mow something went wrong, and my mower has been in the shop now for three weeks, awaiting a back-ordered part. Boy howdy is it frustrating.

At the same time we have been going through a dry-spell around these parts. To call it a drought would be to give the wrong impression. There are no tumbleweeds rolling down the street of Mendota. But we haven’t had much rain, and so my grass hasn’t grown much at all. There’s some tall weeds here and there, but the grass is just fine.

Now I bore you with lawn talk not to delay the inevitable, where I give in and go out and try to mow three or four rather vertical acres with a push mower. Instead I have a point. Just as we are willing to “allow” God to reign over certain parts of our lives, that is our own personal “spiritual realm,” so we “allow” Him to reign over certain parts of the universe. Wars, and rumors of wars are appropriate objects of His attention. Rain also, because there’s not much we can do about it, is something we are content to leave in His hands. Mower repair, or parts procurement, however, that’s a human thing.

When Abraham Kuyper first thundered, “There is no square inch in all reality over which Jesus Christ does not declare, ‘MINE’” we all stand up and cheer such grand and eloquent insights. We stand ready to storm Washington , Hollywood , perhaps even Amsterdam , having heard such rousing speech. That’s a good thing. But it also means that the three or four square inches that are the missing pulley on my mowing deck are missing because the King of the Universe has so declared.

Understanding that God reigns over the details not only should give us greater wonder, it ought also to give us greater peace. When you get cancer, when you go through the Internet treatment, when you deal with a sick child, it is actually comparatively easy to remember that God is in control, and to rest in that truth. When you just miss the green light, when your luggage gets lost by the airline, or when your mower quits in the middle of a mow, it’s a little harder. Which challenge then has the greater power?

Posted by Kara Dekker at 3:01 am No comments:

The Sound of Silence 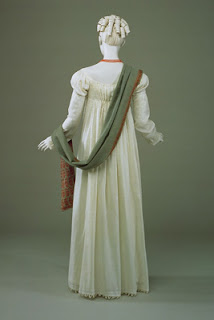 ...simply means that real life has taken precedence over blogging!

Reading has taken a back seat recently to online research, as my sister and myself are taking a class on Regency Film Costume.

Historical costume is fascinating to me, so when I heard that Jennie Chancey was again offering this class, I was thrilled.

Our assignments include watching Jane Austen movies (not hard) and then finding period fashion plate documentation (harder). I never realized how much variation in costume can be found in a mere 30 year time period!

Two weeks more, and then perhaps I'll have time to begin posting more book reviews.
Posted by Kara Dekker at 1:58 am No comments: