I have been been reading Boswell's Life of Johnson, and it's quite fascinating. I'm up to Johnson going to London to try to make a living as a writer. Boswell records a hypothetical budget that one of Johnson's friends had explained to him:


Thirty pounds a year was enough to enable a man to live there without being contemptible. He allowed ten pounds for clothes and linen. He said a man might live in a garret at eighteen-pence a week; few people would inquire where he lodged; and if they did, it was easy to say, "Sir, I am to be found at such a place." By spending three-pence in a coffeehouse, he might be for some hours every day in very good company; he might dine for six-pence, breakfast on bread and milk for a penny, and do without supper.

Let's break that down:

For a writer in Melbourne, the coffee works out about right. The food budget would be roughly equivalent – $2 a day will give you bread and milk for breakfast, while $8 will fill you up in Chinatown. Unfortunately, one would be hard pressed to find accommodation at even the most dingiest dive for $30 a week. The clothes budget, both then and now, is wildly disproportionate.
Posted by John Dekker at 4:03 pm 1 comment: 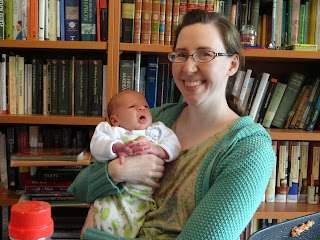 With our new little boy, Zephaniah.

Fewer than in 2012, but I had other fun things to do, like growing a baby and living with an energetic toddler!

So here they are, with occasional comments. I've only linked to reviews, this time.

The Island of Adventure by Enid Blyton

The Lord our Shepherd by J. Douglas MacMillan

They Found a Cave by Nan Chauncy

Turning Points: Decisive Moments in the History of Christianity by Mark A. Noll (my review here)

Thunder on the Right by Mary Stewart

The Puritan Experiment in the New World (1976 Westminster Conference papers)

My Brother Michael by Mary Stewart
I liked it until the last couple of chapters. Not recommended.

Talking About Dragons by William Chad Newsom
Nothing much new here.

Fit to Burst by Rachel Jankovic
Excellent, gospel-centred mothering book. I like her sense of humour and imaginative illustrations.

Ride Like an Indian by Henry V. Larom
Children's book that reads like it was written by a health and safety committee. What kid sterilizes his knife before becoming blood brothers with his best friend?

Evening in the Palace of Reason by James Gaines.
Fascinating double biography of J.S. Bach and Frederick the Great.

Asterix and the Actress

The Four by Peter Leithart

The Light Princess by George MacDonald

Classical Education and the Homeschool by Wes Callihan, Douglas Jones and Douglas Wilson
Short, helpful introduction to the subject.

The Pilgrim's Progress by John Bunyan

The Autobiography of G.K. Chesterton

The Dean's Watch by Elizabeth Goudge
I fear she didn't believe in the resurrection.

The Secret Thoughts of an Unlikely Convert by Rosaria Champagne Butterfield

Empire of Bones by N.D. Wilson (John's review here)
This series keeps getting better. Fascinating incorporation of theology into story.

The Last Judgement by Iain Pears

Death By Living by N.D. Wilson
If you read Empire of Bones, you need to read this too.

The Classical Cookbook by Andrew Dalby and Sally Grainger

The Lord's Service by Jeff Meyers
Not uniformly convincing, but still very helpful in thinking through liturgical matters.
Posted by Kara Dekker at 5:55 pm 1 comment: