On Saturday I turned 33. That's right - the age Jesus died.

Kara gave me a couple of P. G. Wodehouse books and some photos for my birthday. She made me breakfast - bacon, eggs and fried potatoes.

After a leisurely morning, we went out to get some birthday freebies. A number of stores give out free stuff on one's birthday - I got a 6-inch sub and drink at Subway, a serving of poffertjes at Planet Chocolate and a drink at Boost Juice.

We then went to the coin and stamp fair at Malvern Town Hall. Kara bought me a lovely Swedish coin, commemorating Oscar II's silver jubilee.

We spent some time wandering around shops - we visited a couple of stationery shops, and found some second-hand books in an antique shop. Then we went to dinner. We had taken the 2011 Good Food Guide out of the library, and decided to find a place to eat in that. We settled on mr. wolf, a pizza place in St. Kilda, and it didn't disappoint. Kara ordered a potato pizza, and I had one with pancetta, ham and eggs - which meant that in a satisfying sort of way we had begun and ended the day eating the same food.

Finally, we went to the free concert of the Melbourne Symphony Orchestra at the Sidney Myer Music Bowl. About 10,000 people who were there were treated to Bernstein, Barber and Beethoven's 5th symphony.

And today we had a wonderful tiramisu which Kara made for me: 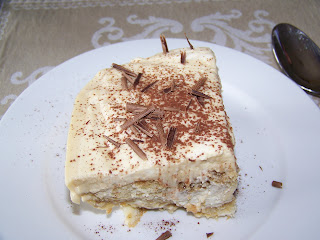