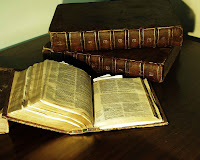 If you've ever searched for clipart, you know that finding just the right image among the available millions can be quite time consuming. So I'd like to share a great source for antique book images which are copyright-free: Pictures from Old Books
I've already used one of the images on my other blog, and plan on keeping this site in mind for future use.
Also of interest is Antique Clipart. (Though I wasn't able to find any book images)
Posted by Kara Dekker at 2:38 am 1 comment:

It's called Sewing Sisters. Not that my sister and I will write exclusively about sewing. It just seemed the right title at the time. :) I expect it won't be of "general interest" (as Father says in Cheaper by the Dozen), but if you like to work with your hands, appreciate beauty in the everyday things of life....or just want to see what two sisters could possibly come up with to write about, check us out! It's been fun so far.

And just so you know: I have absolutely no intention of letting this blog fall by the wayside. Anymore than it has already, anyway! Comforting, aren't I? But really, I do intend to write some more serious reviews. In a cheerful fashion. Soon.
Posted by Kara Dekker at 2:18 am 1 comment:

Getting Serious About Getting Married: Audio Book

I just learned that Canon Press has produced an audio book version of Debbie Maken's Getting Serious About Getting Married. I read this just a little over a year ago, and highly recommend it. It helped to cement my thinking on several topics (including what the "gift of singleness" is), and provided much conversation fodder for my friends and I! Definitely a bit of a shocking book, and one, now that there's an audio version, there's no excuse not to check it out. :) You can even listen to the first chapter for free.

Go to my book review here.

Note: It looks like you might have to wait for your copy of the audio book if you order...it's listed as a pre-order item.
Posted by Kara Dekker at 7:06 am No comments:

Love Among the Chickens by P. G. Wodehouse

This is my first experience of Wodehouse via an audio book. (Courtesy Librivox) It's the story of Jeremy Garnett, aspiring author, and his adventures running a chicken farm with his enterprising but unscrupulous friend Stanley Featherstonehaugh Ukridge.
The bottom line: this was Wodehouse's first attempt at a novel for adults. So if you're new to him, start with one of his better works, such as any of the Jeeves stories. Because Love Among the Chickens has none of the zip, verve or punch I've come to expect from him.
Interestingly, P.G. Wodehouse later rewrote and republished this 1906 novel nearly 20 years later. I'm not sure which text was used on the Librivox recording, as at first glance I saw no dates on the Project Gutenberg entry .
Posted by Kara Dekker at 6:37 am No comments: