The Five Points of Calvinism: Normalized, Notarized and Novelized

A Journey in Grace by Richard P. Belcher 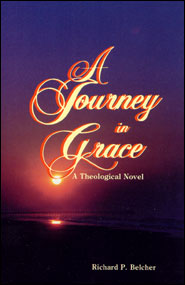 This book was a whole lot better than expected. It is an exposition of the five points of Calvinism is the form of a novel. The narrator is a seminary student who is introduced to Calvinism while starting to pastor a church and also courting a girl. The book is intentionally didactic, but a lot less cheesy than one might fear. In fact, it is one of the most readable introductions to Calvinism I have come across.

Of course, there is much more to Calvinism than just the five points, but the book does touch, albeit tangentially, on the doctrines of Scripture and the Church. Besides, this is just the first volume in a series of more than a dozen books. I should also point out that the book is written in a decidedly Baptist context - by a Baptist and for Baptists.

Anyway, if any reader is wondering what the five points of Calvinism actually are, I will quote a post I wrote on the subject on my old blog:

T stands for Total Depravity which says that before I got saved I was a helpless sinner who couldn't lift a finger for his own salvation.

U stands for Unconditional Election, which says that God chose me before the creation of the world, not because of any inherent goodness I had, not because he foresaw that I would believe, but simply because he loved me.

L stands for Limited Atonement which says that Christ died to pay for my sins, and he really did pay for them fully and completely. He didn't just make it possible for me to be saved, he actually saved me.

I stands for Irresistible Grace which says that the Holy Spirit is completely powerful and that he was strong enough to overcome my sin and my unbelief.

P stands for Perseverance of the Saints, which says that I can't lose my salvation because God will protect me and prevent me from denying him.
Posted by John Dekker at 10:36 am No comments:

Reading the OED by Ammon Shea

I find the concept of this book slightly annoying. On the front cover of my edition is the boast, "I have read the OED so you don't have to." Is this meant as a dare? Because any word lover worth his salt isn't going to be satisfied with such a claim. How are we to know that the author has found the most interesting words?  I feel like going to the library right now and taking down Volume 1: A to Bazouki.

The book is the story of the author's reading through the massive Oxford English Dictionary in one year. The chapters are titled according to the letters of the alphabet and contain a smattering of the  words he discovered along the way. This brings me to my second criticism. Half the fun of the OED is the detailed histories of words. And all that is missing in this book. The definitions provided are sadly brief, and occasionally misleading. (At least Shea admits to this in his introduction.) The entry for Balaamite is particularly disappointing. It seems to be an attempt at humor at the expense of the Bible, and it's quite evident that Shea didn't bother to look at the story in any depth. But this was mild in comparison to the worldly-wise anti-marriage scoff tagged on to the definition for opsigamy.

These gripes aside, I still couldn't resist a book about reading books, and it was a fun read in the main.

Will I add any of the words I read about to my vocabulary? Probably not---well, maybe abluvion. I see that a lot.
Posted by Kara Dekker at 6:24 pm No comments: