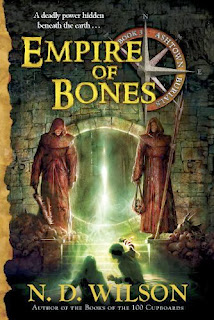 This is the third volume in the Ashtown Burials series. Reviews of this book are a little superfluous. If you have read the first two, you will want to read Empire of Bones, and you will love it. If you haven't read any book in the series yet, you will need to start with The Dragon's Tooth.

Yet I do need to say something about how I love this series so much, and the recent publication of this volume is an excellent opportunity to do so. I want to mention five important themes in the series, that came out in the book in particular.

Firstly, the series is distinctly Christian, and this became slightly more explicit in this book (e.g. p. 333). There is an atonement of sorts, and it has a similar feel to that of The Lion, the Witch and the Wardrobe.

Secondly, as Suzannah Rowntree has astutely pointed out, the Order of Brendan in the book series is used as a metaphor of the Church. This is developed a bit more in Empire of Bones, and we start to see the fuzzy edges of the concept, such the existence of different denominations, and the presence of people who view the Order as a club rather than a calling (p. 313).

Thirdly, Wilson draws heavily on the Old Testament's Book of Daniel. The central character of the book is a boy named Cyrus, who (like his biblical namesake) is a Messiah-figure. His brother, Daniel, is a prophetic figure, and the book contains a significant prophecy about "seventy weeks".

Fourthly, Wilson explores the theme of death in this series, and especially this book. Again and again reference is made to the blessing of mortality. As one transmortal character is told (p. 103), "You fall and you rise and you fall again, but your inner war can never leave off, it can never stay won. Mortals weren't made for it. We were made to run and hit the finish." This is also something that Wilson has been exploring in his non-fiction writing – see this video, for example.

Fifthly, this book is strong on the theme of family, especially fatherhood. There are lots of interesting family dynamics and exploration of the differences between girls and boys (e.g. p. 142).

Finally, I detected a couple of interesting influences in N. D. Wilson's writing that I hadn't seen before. The other day I happened upon a review he had written of Thomas Cahill's How the Irish Saved Civilization many years ago. Wilson had sounded convinced, and his appreciation of Celtic Christianity comes through in Empire of Bones. Also,there is a hint of the Eastern Orthodox concept of the "Holy Fool" (p. 430).

Empire of Bones is brilliant writing. Wilson draws on a wide range of sources, but so much of it is original. This is an imagination most fertile.
Posted by John Dekker at 3:54 pm No comments:

The perilous and exciting doctrine of Sola Scriptura

The Shape of Sola Scriptura by Keith A. Mathison 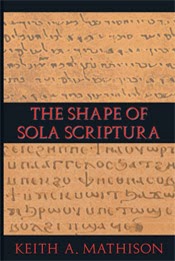 Sola Scriptura ("Scripture alone") was one of the slogans of the Reformation. According to Mathison, it is the idea that the Bible alone is the ultimate source of authority. This book explains what the doctrine is, and also what it isn't, and Mathison says some things that will come as a surprise to many readers. I, for one, learned a lot while reading it.


In the first place, Mathison convincingly argues that Sola Scriptura was not a Reformation innovation. On the contrary, it was the Roman Catholic view of tradition that was the new idea. The Council of Trent states that “saving truth, and moral discipline... are contained in the written books, and the unwritten traditions which, received by the Apostles from the mouth of Christ himself, or from the Apostles themselves, the Holy Ghost dictating, have come down even unto us, transmitted as it were from hand to hand.” Yet this idea of unwritten apostolic tradition really only comes from the 12th century – a mere 400 years before the Reformation.

Mathison argues that the doctrine has four components:
Mathison is not just critiquing the Roman Catholic view; he also criticises the view of the Radical Reformers, liberal Christianity, sects such as the Jehovah's Witnesses, and many modern evangelicals, who all say that Scripture is not just the sole infallible authority, but the only authority altogether. This is summed up in Alexander Campbell's statement, “I have endeavored to read the Scriptures as though no one had read them before me” and the slogan, “No creed but Christ, no book but the Bible”.

Mathison repeatedly emphasises that this is not the Reformer's doctrine of Sola Scriptura. Rather he says that according to Sola Scriptura, the Bible is to be interpreted “in and by the Church” – it's not just me and the Bible – and “according to the Rule of Faith”, by which he means the ecumenical creeds. In other words, if I read the Bible and conclude that there is no Trinity, I'm reading it wrong. Mathison notes that heretics have often appealed to "the Bible only", and this is not what the Reformers had in mind.

So Scripture is the only infallible authority in the Church, but there are other, lesser authorities below the Bible. I think we express this well in my denomination – the Basis of Union of the Presbyterian Church of Australia declares that the Bible is the "Supreme Standard", and the Westminster Confession is the "Subordinate Standard".


And thus Mathison steers us between the Scylla of “both sacred tradition and Sacred Scripture are to be accepted and venerated with the same sense of loyalty and reverence” (as the Second Vatican Council put it) and the Charybdis of “No book but the Bible”. And although G. K. Chesterton might not have believed in Sola Scriptura, he was right when he said that there was nothing “so perilous or exciting as orthodoxy”.
Posted by John Dekker at 3:42 pm No comments: