Very useful for the student of logic

Our Descent from Israel Proved By Cumulative Evidence by Hew B. Colquhoun

(Available from New Boston Fine and Rare Books for $US 56.40) 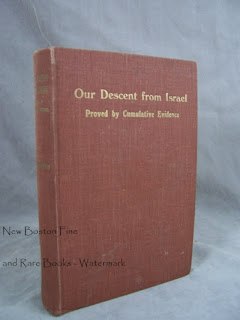 British Israelism is the idea that the British people are descended from the Ten Lost Tribes and are therefore the People of God in a special sense. There was a time, it seems, when it was all the rage - that time being eighty years ago. The combination of the end of the British empire and the founding of the modern state of Israel after World War II has virtually put an end to the idea.

This book isn't of merely historical interest, however. It also functions as a textbook of logical fallacies. I mention a few below, but I'm sure the careful reader will be able to find many more.

Of course, the book is not all bad. It made two sound biblical points. Firstly, there is nothing in the Bible to suggest that Jews have any distinct appearance. Paul gets mistaken for an Egyptian in Acts 21:38, while Jonah has to tell the sailors in Jonah 1:8 where he is from. Secondly, being Jewish is not, fundamentally a racial thing. Esther 8:17 says that "many people of other nationalities became Jews."

Anyway, here are some of the fallacies in the book.

1. False dichotomy: This is a false choice between two statements, when the reader may want to adopt a third statement.

So we have a choice of two theories, either that all our British ancestors were woad-painted savages in Caesar's time... or that we, as a race, have been civilised for at least 5000 years. (p. 31)

2. Argumentum ad hominem: Connecting a belief with a person's character or intelligence.

The man must be mad who, in the face of universal antiquity, refuses to believe that Constantine and his mother were Britons, born in Britain. (p. 43)

3. Contextomy: Quoting something out of context in order to support one's argument.

The tracing of the Royal line of David to the present day fortunately presents no difficulty, because there is in the Royal archives at Windsor a chart showing the descent of our Royal Family from David the shepherd king, in unbroken line, and it should be borne in mind that no document finds its way into the Royal archives which has not pased through some Government department which is responsible for its accuracy... (p. 112) 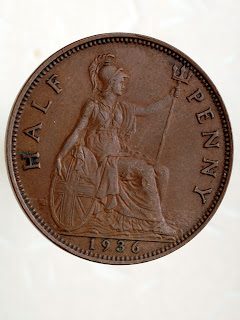 5. Post hoc ergo propter hoc: (literally, "after this, therefore because of this") assuming that because one thing comes after another, the earlier must cause the produce the later.

Really, this is like shooting fish in a barrel.
Posted by John Dekker at 3:22 pm

Is "cumulative evidence" a formal aspect of logic?