Sad in a number of ways

The Death of a Church by Carl McIntire 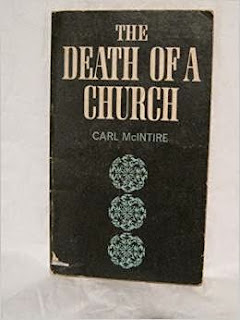 This book is a critique of the Confession of 1967, adopted by the United Presbyterian Church in the United States of America, a denomination that later formed the PC(USA). McIntire had left this body more than thirty years earlier, as a result of the Fundamentalist–Modernist Controversy, and formed the Bible Presbyterian Church. The first half of the book goes through the 1967 Confession section by section, while the second half of the book provides a historical (but intensely personal) overview.

Much of this book is an insightful assessment of theological liberalism, and the language that it uses. McIntire notes that Christ's death is called a "mystery", when the Bible says no such thing: "God has been careful to present in detail the full and glorious meaning of this one act of reconciliation when Christ died upon the Cross for the sins of men" (p. 39). McIntire goes on to suggest that calling it a "mystery" is a "simple device for denying the Gospel and obscuring the meaning of the Cross" (p. 42).

McIntire also points out that the new ordination vows being brought in at the same time no longer ask ministers if they believe the Scriptures are the Word of God, but merely whether they accept them to be "by the Holy Spirit God's word to you". The capitalization, McIntire argues, makes a world of difference.

Yet there are a number of things in the book that leave a bad taste in one's mouth. Even as an Australian, I found it hard not to cringe when I read "this revolutionary program, which the Negroes are promoting" (p. 92). Then, as McIntire relates his own struggles, he takes aim at Francis Schaeffer and Robert Rayburn, who split away from the Bible Presbyterian Church in 1956 to form a new denomination that would later become the Reformed Presbyterian Church, Evangelical Synod, which in turn merged into the Presbyterian Church in America. Schaeffer and Rayburn, claims McIntire, "have gone back on the faith they once professed", and their church has a "socialistic structure" (p. 167).

This was my introduction to Carl McIntire, who died in 2002. We can honour him as a warrior for the faith, but some of his attitudes and priorities sadden me.

The book is available in full here.
Posted by John Dekker at 3:43 pm