Anyway, here is my so-called "shelfie": 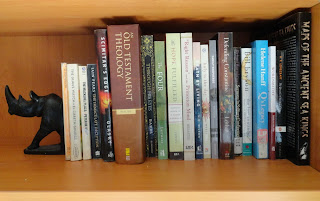 I include a Wodehouse book on my reading list every year. This will be the 22nd one I have read.
The Dean's Watch by Elizabeth Goudge ✔25th Oct.

I read City of Bells by the same author in 2012.
The Mackerel Plaza by Peter de Vries ✔25th Aug.

This is part of a series of detective novels set in the art world. The protagonists are an English art dealer and his girlfriend, who is a member of the police art squad in Rome.
Scimitar's Edge by Marvin Olasky ✔19th Mar.

Olasky is best known as the editor of WORLD magazine, but among many other books, he has also written this novel.

I have a particular interest in the Old Testament, and aim to read one book like this a year.
Through his Eyes: God's Perspective on Women in the Bible by Jerram Barrs ✔11th Feb.

This book discusses about twenty different women in the Bible. This book will, I think, help me in my doctoral thesis, which is on the portrayal of women in the Book of Samuel.
The Four: A Survey of the Gospels by Peter Leithart ✔28th Dec.

I really like Leithart, and this book seems to be in the same vein as his Deep Exegesis, which I read a few years ago.
The Hope Fulfilled: Essays in Honor of O. Palmer Robertson ✔31st Jul.

I generally enjoy Festschriften, and this one has a really interesting collection of essays.

I am reading the Princetonians in some depth this summer, presently engaged with Charles Hodge's The Way of Life as well as Archibald Alexander's Thoughts on Religious Experience. The "unorthodox proposal" in this book is that the Princetonians were consistently Reformed thinkers rather than Enlightenment rationalists.

I love Wilson's fiction (see my reviews of Empire of Bones and Leepike Ridge) and this looks like it is just as good.
Holy is the Day: Living in the Gift of the Present by Carolyn Weber ✔29th Jan.

Weber's Surprised by Oxford was excellent (see Kara's review) so I am keen to read this, even though the topic doesn't seem as interesting.
Family Shepherds: Calling and Equipping Men to Lead Their Homes by Voddie Baucham ✔18th Apr.

I appreciated Baucham's Family Driven Faith (see my review) and this book is rather relevant for me.

Yes, Leithart is the lone writer to appear twice on this year's list. He argues in this book that Constantine was a genuine convert to Christianity.
Sermons in Solitary Confinement by Richard Wurmbrand ✔26th Mar.

Wurmbrand was a Romanian Christian pastor imprisoned from 1948 to 1956 (including three years in solitary confinement) and again from 1959 to 1964. After his release he left Romanian and founded the Voice of the Martyrs organization. This book will be my Lenten reading for 2014.

This book was published around 25 years ago, but I'm sure it will yield some fascinating insights.
Q's Legacy by Helene Hanff ✔29th Jul.

Hanff is best known for her wonderful 84, Charing Cross Road. (I never realised until now that there was a comma in the title!) This book seems to be a prequel of sorts. The "Q" referred to in the title is Sir Arthur Quiller-Couch.
Wordsmithy: Hot Tips for the Writing Life by Douglas Wilson ✔18th Jan.

I don't particularly regard myself as an aspiring writer, but Wilson is usually fun to read.
The Dreams of the Witch House And Other Weird Stories by H. P. Lovecraft ✔30th Aug.

I have read a few Lovecraft stories, although now I think of him mostly in connection to Arkham Horror, which is one of my favourite board games.
Maps of the Ancient Sea Kings by  Charles Hapgood ✔9th Oct.

Hapgood argues that the Piri Reis map provides evidence of global exploration by an as yet undiscovered pre-classical civilization.
Posted by John Dekker at 10:03 am