Nobody seemed to like him much but we think he's great 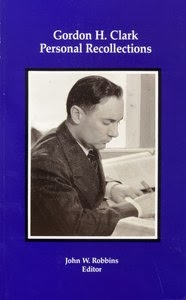 Gordon Clark was a 20th-century American Christian philosopher and theologian. This is a book published a few years after his death by The Trinity Foundation, an organisation dedicated to promoting his work. This volume is a collection of reminiscences by people who knew Clark.

This is a rather strange book. Again and again reference is made to people who disagreed with Clark, disliked him, and even doubted his Christian faith. One slowly gets an idea of why that might have been the case, but this volume lacks an explanation of the issues involved. It would also have been improved by a balanced assessment of Clark's life and thought.


From the year when J. Gresham Machen died (1937) to the first publications of Henry and Carnell after World War II, Clark stood almost alone for the set of essential beliefs that came to serve as the foundation of evangelical scholarship in the 1950s. Others who may have shared Clark's convictions neglected the vital matter of getting those views into print.

This is simply not true. It didn't take me long to find some counter-examples:
The last book mentioned is significant, since it was the first book published by Baker.

Gordon H. Clark: Personal Recollections includes numerous frank acknowledgements of Clark's weaknesses, but it does seem to be a little starry-eyed in its assessment of him.
Posted by John Dekker at 8:31 am