Engaging with Keller: Thinking Through the Theology of an Influential Evangelical 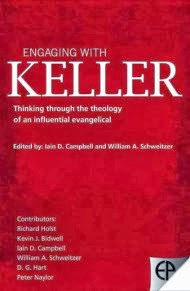 This is a book of essays critiquing certain aspects of Tim Keller's theology. It is written by Presbyterian ministers, acknowledging that Keller is committed to Reformed orthodoxy (p. 20) but taking issue with the way he has chosen to express certain things (p. 21). Now, I like Keller (and have for the last fifteen years) but I found this book surprisingly convincing.

Of course, there are three levels at which one must be convinced:
There is no question that the book is accurately portraying Keller's ideas, and the critics seem to be on the right side on some of the points discussed. As to how important Keller's unfortunate phraseology is, I'm not sure. Nor am I sure that it was worth writing a book about it.

Anyway, here are the chapters of the volume, with a running score:

Introduction – the editors do a fine job defending the publication of the book, but I am still uneasy. Is it really worth the effort? The editors asked Keller to write responses (p. 22), but he was too busy. That's a real shame, I think, and at this stage the points are shared.

Sin – when Keller talks to "moderns" he talks about sin as disobedience, but in preaching to postmoderns he emphasises sin as being idolatry. Are we allowed to emphasise different aspects of biblical truth like that? I see no reason not to.

Hell – following C. S. Lewis, Keller argues that people in hell are there because they chose to be. Now, this may be a simple case of emphasis (as with the previous point) but Keller seems to be downplaying the idea of God condemning people to hell in such a way as to make me think this is a fair criticism.

Trinity – Keller describes the persons of the Trinity has being in a  "divine dance". Kevin Bidwell ably demonstrates that this is not the same as perichoresis, and that it isn't a great illustration.

Mission – Keller's vision is of the Church being involved in social justice and community relief work. But this is not so much church work as kingdom work, as Keller himself acknowledges (p. 156). Points are shared here as well.

Hermeneutics – Keller has a tendency to base his ideas on his readings of parables, which is a perilous exercise. But they shouldn't be regarded as off limits for Christian doctrine, and it's not enough to say they are intended to be ambiguous (p. 178). I'm giving this one to Keller.

Evolution – Keller is relatively happy for Christians to accept evolution in some sense, as long as they hold to a literal, historical Adam. That strikes me a precisely where we need to draw the line in the sand. Keller again.

Ecclesiology – D. G. Hart, perhaps the most notable of the critics, rounds out the volume with a shocker. In contrast to the generally irenic tone of the volume, Hart accuses Keller of breaking his ordination vows by co-operating with non-Presbyterians (p. 235).

In conclusion, I hope Keller takes on board some of the criticisms expressed in this volume. But there isn't anything here that would make me counsel people against reading Keller's books.
Posted by John Dekker at 4:59 pm