I've actually been reading this for ages. Now that my sister-in-law has started reading it, the race is on to see who finishes first. 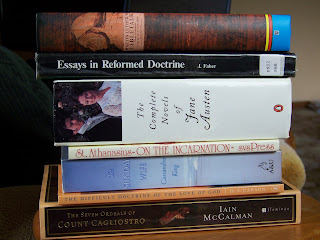 I remember my old church history lecturer, Maurice Betteridge, once saying that Luther would be a much more interesting dinner companion than Calvin. Fortunately for us, some zealous disciples wrote down the stuff he said at the dinner table.

I'm returning to my roots with this book. This is a collection of essays from a man who for twenty years was Principal of the Theological College of the Canadian Reformed Churches, the denomination in which my Dad was once a minister. Most of Faber's essays deal with the doctrine of the Church.

An Introduction to Aramaic by Frederick Greenspahn

This is the first book I've read on computer. Luke and Amy kindly gave me their old laptop last month, and I've been using it for work. I installed a copy of my Bible software on it, and discovered that it included this book. I'd been meaning for ages to learn Aramaic, and thought this was a great opportunity. 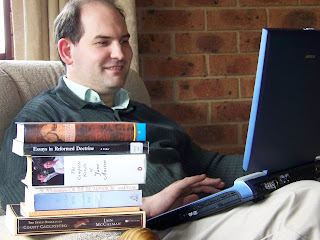 The Sunday Wife by Cassandra King

This is one of the books discussed in the excellent Preachers and Misfits, Prophets and Thieves: The Minister in Southern Fiction, which Kara gave me for my last birthday. The main character, Dean Lynch, is a minister's wife neglected by her husband. Plenty of food for thought.

The Difficult Doctrine of the Love of God by Don Carson

One reason the doctrine of the love of God is difficult is that the Bible talks about God's love in several different ways. The love the Father has for the Son, God's general love for his creation, God's "salvific stance towards his fallen world," his "particular, effectual, selecting love toward his elect," and love that is conditioned on obedience. Carson deals with all these aspects in a masterful way.

The Seven Ordeals of Count Cagliostro by Iain McCalman

The story of Count Cagliostro is a fascinating one, and McCalman tells it well. It is, in effect, a history of Europe in the second half of the 18th century, since Cagliostro's story intersects with those of Marie Antoinette, George IV, Casanova and Catherine the Great of Russia.

Athanasius' On The Incarnation

This is the edition that comes with the famous introduction by C. S. Lewis, in which he says that it is a good rule, after reading a new book, never to allow yourself another new one till you have read an old one in between. "If that is too much for you, you should at least read one old one to every three new ones." Lewis also says that he tends to find "doctrinal books often more helpful in devotion than the devotional books." On The Incarnation is a great book to read devotionally.
Posted by John Dekker at 5:31 pm

Great post and a great line up of books.

Mr Betteridge is probably correct about Luther, although he was pretty grumpy and, on his own admission, flatulent.

An meal with Calvin could be a bit of fun. Sinclair Ferguson said at the 2009 Ligonier Conference that Calvin's favourite game was keys, where you stand at one end of a table and push a key as close to the other end as you can without pushing it over the edge. Just get a bunch of keys and some geneva gowns and your next youth group evening has organised itself!