Since Kara has posted her list of books recently read and currently reading, I thought I'd better do the same.

Enthusiasm by R. B. Knox

This book has numerous untranslated French and Latin quotations, but it's still worth the effort. Writing from a Catholic perspective, Knox describes movements within Christendom such as Jansenism and Methodism.

The Spirit in Public Theology: Appropriating the Legacy of Abraham Kuyper by Vincent Bacote

I'm giving a lecture on Kuyper at the end of August, so I thought I'd better read some more about him.

Paton was a pioneer Presbyterian missionary to Vanuatu. Last year our denomination had a missionary awareness day for kids, and I dressed up as him: 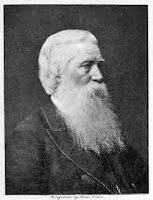 I'm the one on the right.

The book is a follow-up to Guns, Germs and Steel, which I read a couple of years ago. That book made the argument that it is geography rather than biology that determines the destiny of civilisations. Which is just a secular version of Acts 17:26: "From one man he made every nation of men, that they should inhabit the whole earth; and he determined the times set for them and the exact places where they should live."

Here Diamond chronicles civilisations that collapsed, such as that of the Maya, the Vikings on Greenland, or the inhabitants of Easter Island.

This is almost post-apocalyptic in its tone. Heiland, the protagonist, is a coin minter who works as an intelligence officer for the Tennessee Free State in its struggle against the US Government.

Probably the best book on preaching around.

The New Faithful by Colleen Carroll

Does for the Catholics what Young, Restless, Reformed did for the Calvinists.

This rather intense book is set in a 1964 in which Germany had won World War II.