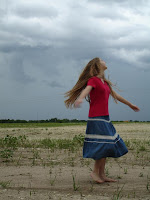 Today I am introducing a new feature of my blog: guest book reviews. At this time, my “guests” will be limited to my immediate family; in future I may extend the circle to include others. My first guest writer is Christina Hope, my younger (and only) sister. She is an avid writer of stories, an accomplished violinist, and my opposite in personality: outgoing, effervescent and giggly. This is her first book review.

" My first book review: a review of one of my favorite books,
Derwood Inc. A Peabody Adventure by Jeri Massi.

I’ve read this book more than ten times. It says it was written ‘for grade four’, but honestly, I’m in 9th grade and I still think it’s great. The title gives you no information of what this book is about so I’ll have to tell you myself. This exciting mystery (which is written in two parts) takes place in Peabody, a fictional place in Wisconsin. Penny Derwood, the oldest child in a Christian family of eight, is the narrator. She is about twelve years old, her brother, Jack, is eleven, there’s Freddy and Renee the five-year-old twins, and little Marie.

My favorite character is Jack, an exceptionally smart eleven-year-old. Sometimes even his older sister Penny can’t understand him.

“I had the idea that he (Jack) had just said something impressive, but I couldn’t figure out what it was.”

But somehow, while being very clever and quick thinking, he has a hilarious streak of ignorance.

I love his imaginative stories about the ‘fifty-ton, mile-long, giant killer octopus’.

Penny and Jack are partners, and they stumble into a mystery together. But Criminals don’t really hide out in run-down mattress stores do they? Who is this Moses? What will it be like spending the summer with Aunt Irene, the crime buster?

I like part one better than part two, but you’ll never figure out the entire mystery unless you read both parts."

***********************************
I can’t post this without adding some comments of my own! This was one of my childhood favorites, and still holds a high place on my list of good children’s books. The humor employed throughout is the biggest drawing point for me, but I also enjoy its (mostly) realistic portrayal of life in a family with many children. Derwood, Inc. is the first in a series published by Bob Jones University. The others are nearly as good, and definitely worth reading at least once.
Posted by Kara Dekker at 5:50 am

What a neat feature to add to your blog! I love the idea. I also like the picture of Christina. Very picturesque for her personality. :)

Thanks for your review, Christina. I may want to borrow that book sometime. :) You should write more reviews.

BTW, Kara, I see you have started "Teaching the Trivium." Looking forward to hearing your thoughts from it. Where do you get the book photos? It is a great way to show what you are reading.

Have a blessed week.
~Lydia

Jeri Massi! I know her. Did you read her Secret Radio when it was serialised online? Definitely not for grade four - it's quite intense. But also quite brilliant.

I have an account on All Consuming, which is how I get the photos. They give you a bit of code to add to your blogging template. There's probably other ways of doing the same thing, but that's how I do it. My profile thingie is here: http://www.allconsuming.net/person/prairiegirkja/

No, I've not read the Secret Radio. I wasn't too sure how well I'd like her later stuff...