Some good points, but based on an unconvincing hermeneutic

Corporal Punishment in the Bible: A Redemptive-Movement Hermeneutic for Troubling Texts by William J. Webb 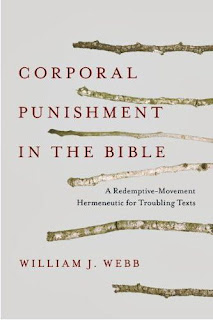 This is a book arguing against smacking (spanking) children. Webb particularly interacts with organisations such as Focus on the Family, which advocates smacking, but suggests a parent administer no more than two smacks at a time. Webb argues that such an approach is not "biblical" at all, in the sense that it has moved beyond what he calls the Bible's "concrete specific instructions". Webb points out that the Book of Proverbs encourages using a rod on the back, rather than a hand on the bottom. Webb than says that the way Focus on the Family has moved beyond the Bible is a good thing, and we should go even further, following the Bible's own trajectory towards a more gentle approach. Webb calls this a "redemptive-movement hermeneutic".

Firstly, the book has a rather condescending feel about it. Webb is constantly "commending" corporal punishment advocates for going beyond the Bible, when they would argue, of course, that they are faithfully following the principles laid out in Proverbs. Webb also notes that he used to believe in smacking, but now he knows better.

Secondly, Webb focuses his attention on a narrow band within the broad spectrum of Christian smacking advocates. He seems to have no knowledge, for example, of Michael Pearl, who does indeed argue for using a "rod". Maybe he knows about Pearl but considers him too fringe or discredited to be worth mentioning. In any case, different pastors, authors, and parents apply the biblical teaching on smacking in different ways (this article from Capitol Hill Baptist Church mentions a plastic spoon), and it's not clear that the Focus on the Family approach can be said to be representative. Webb struggles to articulate what could be wrong in using  an actual rod. The only arguments he gives are: (a) it gives him a feeling of revulsion, and (b) even Focus on the Family avoids it.

Thirdly, at the heart of everything he says about smacking is Webb's redemptive-movement hermeneutic. It's the idea that we look at how the Bible's approach to a certain issue is different to that of the surrounding culture. (In this case, ancient Egyptian and Babylonian laws.) To put it bluntly, we see how the Bible has improved upon that, we discern the direction that the Bible takes us, and go further in that direction. This sounds a lot like improving upon the Bible, and it is. Webb's hermeneutic fails to take into account that in Christ we already have God's fullest revelation. For more details, see Thomas Schreiner's review of Webb's earlier book, Slaves, Women & Homosexuals.

I was all set to give this book a two-star rating, but Webb includes a postscript in which he gives an excellent overview of "alternative" disciplinary methods. Regardless of whether one agrees with smacking or not, there is a lot of helpful parenting advice here. That was good enough to lift the book up to three stars.
Posted by John Dekker at 2:51 pm