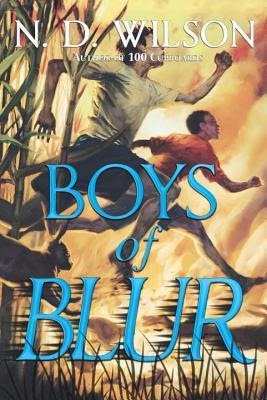 N. D. Wilson's latest story is essentially a zombie novel, but don't let that turn you off. (In fact, he never even uses the word.) I was a little sceptical at first as to how plausible the supernatural elements were going to be, but they work, mainly because of the way that Wilson draws on the great Anglo-Saxon poem, Beowulf.

Wilson has a special interest in writing American stories. In this interview, concerning The Dragon's Tooth, he notes that growing up, he had the assumption that "you had to be in England if you wanted to have a magical adventure", and so he set out to make magical adventure possible in America. Boys of Blur is set in Florida's  Everglades region. It does for Florida what 100 Cupboards did for Kansas; incidentally, it also does for American football what 100 Cupboards did for baseball.

Perhaps the biggest strength of the novel is the way it brilliantly depicts what it means to face temptation. Usually this is a temptation to anger, resentment, or envy – e.g. "Just about every human on the planet was better off than Charlie at this moment" (p. 157) or "This stupid town and all its petty people deserved everything they were getting" (p. 169). But this is an optimistic novel – the main characters resist these tempting thoughts. Wilson also eschews any form of moral ambiguity – these thoughts are always depicted as being wrong.

This is a great story, that I can heartily recommend to young and old alike. Only one minor quibble: on p. 95 it says "the two tumbled off of Charlie". There's no excuse for that.

Finally, here is a very good review of the book: You’ve got your aforementioned zombies as well as a paean to small town football, an economy based on sugar cane harvesting, spousal abuse, and rabbit runs. It sounds like a dare, honestly. “I dare you to combine these seemingly disparate elements into a contemporary classic”.
Posted by John Dekker at 9:27 am

Unknown said...
This comment has been removed by the author.
12:18 pm

Timothy gave me Beowulf for Sinterklaas and Boys of Blur for Christmas! I am excited to discover for myself the connections that you point out. I also see that the first time I read this review I overreacted to your use of the (entirely correct, if disturbing) term "zombie". Apologies, brother! One of my favorite things about N.D. Wilson's writings are his clever descriptions that maker the story relatable, even when the situation is not. Looking forward to reading this gem again. :)