A view from outside the Christian Patriarchy Movement

Quiverfull: Inside the Christian Patriarchy Movement by Kathryn Joyce 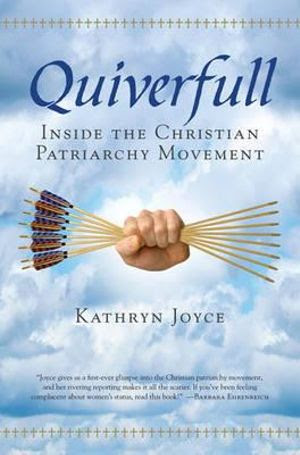 This is a book I could scarcely put down. It describes the Christian patriarchy (also known as "Biblical patriarchy") movement, which is something I am interested in, know a bit about, and to some extent identify with.


The book has three sections. The first section ("Wives") deals with the "biblical womanhood" movement, which emphasises wives submitting to and helping their husbands at home. The second section ("Mothers") looks at the "Quiverfull" movement, which eschews contraception and emphasises a couple having as many children as God will give them. The name of the movement comes from Psalm 127 - "Like arrows in the hands of a warrior are children born in one’s youth / Blessed is the man whose quiver is full of them". The final section ("Daughters") deals with biblical courtship, while also touching on the "Stay At Home Daughters" movement, exemplified by Anna Sofia and Elizabeth Botkin, and their book So Much More. This emphasises girls staying at home (and more importantly, under their fathers' authority) until marriage.

The title of the book is therefore a bit misleading, but the subtitle is accurate - all these three things come broadly under the heading of "Christian patriarchy". However, it must be pointed out that the author is not a Christian. Joyce doesn't seem to understand what "faith" is - she feels that the Christian hymn "Trust and Obey" is bleak (p. 154). She mentions Bible verses that adherents of patriarchy would appeal to, but has no real ability to interact with them. And yet, where the reader may have expected antagonism, Joyce is surprisingly dispassionate. She devotes a chapter to the story of a lady who was excommunicated from Doug Phillips' church, and tells only her side of the story, but is still not wholly sympathetic to her, and the chapter ends with this lady firing her divorce lawyer for failing to abide by her wishes (p. 129). Excommunication appears a few times in this book, and Joyce refers to an interesting Wall Street Journal article on the subject. She doesn't seem to realise, however, that pulpit announcements about church discipline have always been part of Reformed liturgy.

The worst feature of the book is the complete and utter lack of footnotes. This is totally inexcusable for a book like this, and I don't know how the publisher (Beacon Press, which belongs to the Unitarian Universalist Association) let her get away with it. Yes, the book is mostly the fruit of personal interviews, but Joyce is still constantly quoting published material. For example, she refers to a book (The Church is Israel Now) that argues for "replacement theology", and she asserts that "Christian reviewers condemned the book for promoting a form of theological anti-Semitism" (p. 150). Well, which reviewers? Who was it? My guess is that the reviewers would be premillenial dispensationalists themselves.

Quiverfull also contains numerous silly mistakes. Joyce claims that when Al Mohler became President of Southern Baptist Theological Seminary, he required all the faculty to pledge allegiance to the Westminster Confession of Faith (p. 34). What Mohler enforced, of course, was the Abstract of Principles, which, while derived from the WCF, differs from it in affirming believers' baptism by immersion. Joyce also says that Pope Benedict XVI "canonized an Italian farmer's wife for bearing twelve children" (p. 141). Joyce is referring to Eurosia Fabris, except that Fabris was beatified, not canonized, and she had eleven children, not twelve, and two of her children were adopted.

Perhaps the most bizarre claim of the book comes when Joyce attempts to link the Quiverfull movement with holocaust denial - she sees both the movement and the Holocaust as "manipulating population as a means of cultural domination, whether through limiting one group's freedom or ability to reproduce or mandating higher fertility from another group" (p. 150).

Finally, this book is almost exclusively focused on the movement in America, apart from discussions of population decline in Europe, and of conservatism in Poland. Now, when Joyce suggests that most Quiverfull families are poor (p. 206), this may well be the case in the U.S., but in Australia the situation would be quite different. My calculations based on this website tell me that a low-income Australian family with eight children under 16 would receive about $1200 per week in family payments, which is over $60,000 a year. The only catch is that (as of last July) you are required to have your children immunized. Hence, no-one in Australia can really say that they cannot afford to have more children.

By and large, Quiverfull is a fair portrayal of the Christian patriarchy movement, and most adherents of the ideas would be able to recognise themselves in the descriptions of people in the book. The movement is quite diverse, even theologically, embracing Reconstructionists, Fundamentalists and Pentecostals. Joyce is antagonistic to the movement, but often sympathetic to the individual women she interviews. Yet one feels that she is not sure quite what to make of her subject matter. In fact, she concludes the book by describing a woman in the movement, and frankly admitting "I don't know what to make of her" (p. 240). In this way, however, the reader is delivered from a heavy-handed evaluation, and is free to make up his or her own mind.
Posted by John Dekker at 3:59 pm

Interesting review – thanks! It piqued my interest – which is, I guess, what a good book review should do.

I guess this is discussing Christian Patriarchy as distinct from Complementarianism?

Not really. The chapters on the biblical womanhood movement have a lot to say about leaders of what is usually called complementarianism, like Paige Patterson. Joyce seems view complementarianism as a subset of patriarchy, while recognising that the movement is very diverse.

Of course, people such as Rachel Held Evans would say that there is no difference. And the review on the CBMW website criticises the book for "caricaturing complementarianism".

I'm not surprised, given your review, that Joyce fails to see any distinction.

The CBMW, however, has been careful in the past to distinguish itself from "patriarchalism," and indeed the review by Nathan Finn says "Quiverfull is not a trustworthy introduction to complementarianism... it is so important for complementarian groups such as CBMW, the Southern Baptist Convention, and the Presbyterian Church in America to present a biblical vision of manhood and womanhood as an alternative..."

I read a review of this book on another blog (from a woman who was quite hostile to complementarianism) and was amazed that she quoted this book as saying for example that according to the "stay-at-home" (hacking laughter, sideways glance at interstate and international air tickets) daughter movement, girls need to submit to their brothers.

Well, from this well-researched view on the inside, that's laughably false. The advice is to encourage and support your brothers instead of putting on your hobnailed boots and stomping all over them, but that's as far as it goes, and I should know--I've read the Miss Botkins' book on the subject, It's (Not That) Complicated, twice. (By the way, I HIGHLY recommend that book. Much better-written than So Much More).

I'm sure that being such a passionate supporter of the ideas critiqued in this book would render me entirely unable to give it as impartial a review as you have, John. But I'd be careful of half-truths and misrepresentations like the above, which the non-footnoted format makes it easy to do, of course.

The review is correct, Suzannah - Joyce says "submitting themselves to their fathers and, to some extent, their brothers" (p. 223). I think it came from a Father-Daughter Retreat.

The article "Supporting Our Boys Out There" on the VisionaryDaughters website includes the exhortation, "Let them assert themselves, lead, and teach you things". That certainly comes close to supporting Joyce's claim, especially with her "to some extent" qualifier.

I'd disagree that that means submission, John.

The reason is that the classic definition of submission I've had from Mrs Wilson and others is that submission doesn't actually begin until a husband and wife disagree. If they agree on something, there's no question of submission.

By contrast, in no case do either the Botkins or anyone else suggest that a girl owes her brother any duty of submission in this sense.

The sentence you quote actually subtitles a section in It's (Not That) Complicated. Look how they explain this in context (p62):

As sisters, it's our natural, sinful inclination to suppress our brothers when they try to assert their natural tendency toward leadership and authority. We like to keep them in their place!...[b]e sure not to cheat yourself out of a first-class, in-house education on cloud computing, or the difference between a Pleisiosaur and a Kronosaurus.

If the better part of our relationship (to say nothing of the worse part) is just keeping our brothers fed, keeping them in line, and getting them to bed on time, then we're not really sisters; we're governesses.

It won't kill you - let them lead. Because even after fifty years of women's lib...they're still the better man.

In other words, by 'lead' and 'teach' these girls mean 'stop treating them like children and start listening to what's important to them, even if it's a tutorial on Lego usage'. That's all. We're not talking about submission here, we're talking about common courtesy.

Better yet, flip over to pages 64-65 where they talk about helping their brother Isaac with a big project on Egypt (stunningly good product, by the way, endorsed by George Grant and everything), and how this disrupted everything they had planned for the year, but decided to do it anyway:

Lesson learned: We need to be very careful that we don't pursue a brand of femininity that is so obsessed with itself that it can't be interested in what our brothers are up to.

Notice who they're addressing--sisters who refuse to treat their brothers with basic respect; that's all. Only the most rabid egalitarians could have a problem with this ;).

Actually, it's this particular chapter of the book that makes me so keen on it--it's a manual for building really deep relationships with actual brothers, something that I think has been missing from a lot of Christian homes where the bossy elder sister and the annoying little brother are staple items.

Might I close this lengthy comment by saying that I will eat my hat on the day that any of the Botkins say something as stupid as "Sisters owe their brothers a biblical duty of submission."

Similarly, this article on the VF website calls on an older sister to "put yourself under your [younger] brother."

The CBMW community probably does shade into the VF community to some extent, but this kind of brother/sister language would, I think, be foreign to the CBMW mindset. Indeed, it's almost antithetical to the approach of people like Steve Farrar, who seem to think more in terms of delegated authority than in terms of gender per se.