Radical: Taking Back Your Faith from the American Dream by David Platt 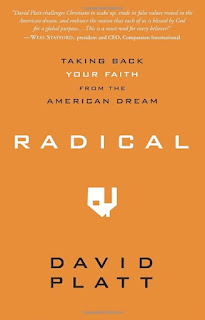 As requested, a review of this challenging and encouraging book.

This is an American book, and, as the subtitle suggests, Platt is specifically addressing Americans, and wealthy, middle-class Americans at that. Of course, greed and discontent are known in all cultures, and the goals of possessions, one's own home and a comfortable retirement are also common here in Australia. But it is a bit strange to hear statements like "Few Christians know of C. T. Studd (p. 178), or even that John Paton (whom I dressed up as once) is "relatively unknown among Christians today" (p. 175). Well perhaps, these men are relatively unknown, but no doubt they are better known in my circles than in Platt's.

Despite the title, this really is a book about the ordinary Christian life. Yes, following Jesus is radical, because he requires allegiance to him above all things, but there is little in this book beyond the basics of Christian living. But that doesn't detract in any way from the book's value.

I particularly liked Platt's questioning of the phraseology of "accepting" Jesus (p. 37), when, in fact, we need Jesus. I also liked his description of our purpose as being to "enjoy his grace and extend his glory" (p. 65) - which is basically like the first question and answer of the Westminster Shorter Catechism ("Man's chief end is to glorify God, and to enjoy him for ever") - though interestingly in reverse order.

The most disappointing aspect of this book was that he begins the book by reflecting on megachurches, but never returns to the idea. He starts off by wondering how he could reconcile the fact that he was pastoring thousands, with the fact that Jesus "spent the majority of his ministry time with twelve men" (p. 2). Yet, the radical discipleship described in the book doesn't seem to touch the concept of megachurches. Now, I have no doubt that Platt is a faithful pastor, teaching, encouraging and equipping the people of God to faithfully follow Jesus. But it would seem that he was convicted that the concept of megachurches do not faithfully represent what Jesus was on about, but is happy to continue as a megachurch pastor. If so, this is a significant blind spot.

In summary, this is an enjoyable book. Platt is a faithful pastor, and communicates effectively through apposite illustrations. It is also a stimulating and challenging book, even for this Australian.
Posted by John Dekker at 6:21 pm