Film review: A Game of Shadows 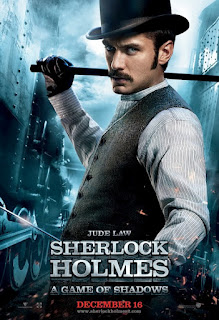 Last week I bought the DVD of Sherlock Holmes: A Game of Shadows. This is the very first time I'd bought a DVD on its release date. I was not disappointed, however - the film is a worthy sequel to the first movie.

My favourite line in the film occurs when Holmes proposes a toast to Dr Watson, and says "To my dear friend, Dr John, um, Hamish Watson." Now, this is an extraordinary nod to the most die hard fans of the Holmes canon. You see, Arthur Conan Doyle never tells us Watson's middle name. He is referred to as John H. Watson", and it was Dorothy L. Sayers who proposed that the "H" stood for "Hamish."

Let me explain.A number of prominent writers have indulged in speculation about Sherlock Holmes. Sayers notes that this has been a particularly Christian exercise - in her book Unpopular Opinions, she says, "The game of applying the methods of the 'Higher Criticism' to the Sherlock Holmes canon was begun, many years ago, by Monsignor Ronald Knox, with the aim of showing that, by those methods, one could disintegrate a modern classic as speciously as a certain school of critics have endeavoured to disintegrate the Bible."

Conan Doyle refers to "John H. Watson" on the title page of A Study in Scarlet, but nowhere mentions his middle name. In The Man with the Twisted Lip, however, he has Watson's wife address him as "James". It would be too easy to say that the author made a mistake, so Sayers looks for a more elegant solution. She suggests that his middle name is Hamish, which is the Scottish form of James. "By playfully re-Englishing it to 'James' she found for her husband a pet-name which was his own name as well."

Obviously, Sayers wrote this with tongue in cheek. But I still find it amazing that this found its way into the movie, and the line was delivered with such subtlety as to bring delight to any fan of Sherlock Holmes, or, indeed, of Dorothy Sayers.