On Saturday we went to the Clunes Booktown. Clunes is a small town midway between Castlemaine and Ballarat, and every year it has a special book festival. We heard about it from Suzannah, and it had plenty of the vintage novels about which she likes to blog. We had a great time in Clunes, although the shops and stalls were not particularly pram-friendly. Here is what we bought: 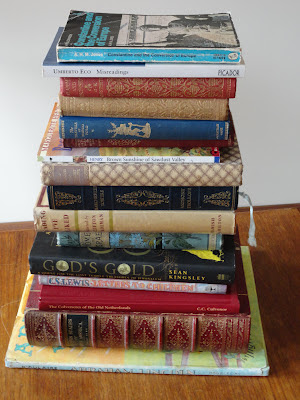 I was going to ask if I could borrow "Letters for Children" by C.S. Lewis after you read it, then remembered how impractical that would be... Sounds like you got some great books! :D