I saw the 2002 film recently, and that inspired me to read the story. I had a Phoenix 60p edition (these were cheap imitations of the Penguin 60's design) on my shelf, and I started reading it before I realised it was an abridgement - chapters 3 to 6 of a twelve chapter novel. Fortunately, the whole book is available on Wikisource, so I'm reading it online now.

The Message of Zechariah by Barry Webb

I heard Barry Webb speak in Melbourne last July as part of an MTS training day, and that inspired me to preach through Zechariah. So that's what I'm currently doing on Sunday mornings at Aspendale. We're looking at Zechariah 3 this Sunday, and aim to finish the series at Easter.

Cohabitation and Marriage: A Pastoral Response by Greg Forster

Reading this book was helpful in thinking through what I mean when I say a book is biblical or not. This book is not biblical. Forster does not, for example, explain how the covenantal nature of marriage (as seen in Malachi 2:14) makes it different to cohabitation, nor does he discuss the relevance of Genesis 1 and 2. Being biblical means looking at what the Bible says is the nature and purpose of marriage. This is not to say that a biblical response needs to be unpastoral, but the subtitle of Forster's book really ought to be "A Sociological Response". Forster adopts a functional definition of marriage - examining the difference it makes socially - rather than a biblical one.

His Truth is Marching On: Advanced Studies on Prophecy in the Light of History by Ralph Woodrow

This seems to be mainly a response to premillennial dispensationalism. 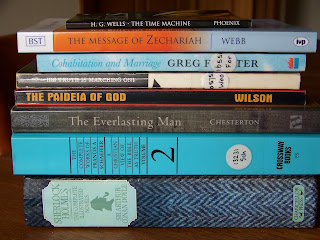 The Paideia of God by Douglas Wilson

This is, I believe, the 18th book I've read by Douglas Wilson.

The first half of the book deals with prehistoric man and pagan religion, and is somewhat mediocre. The second half is much better, and talks about Jesus. Although never reaching the dizzying heights of Orthodoxy, GKC does have some good things to say concerning the Church:

Tolstoy or some great preacher of peace among peasants has been shot as a mutineer for defying conscription; and a little while afterwards his few followers meet together in an upper room in remembrance of him. They never had any reason for coming together except that common memory; they are men of many kinds with nothing to bind them, except that the greatest event in all their lives was this tragedy of the teacher of universal peace. They are always repeating his words, revolving his problems, trying to imitate his character. The Pacifists meet at their Pentecost and are possessed of a sudden ecstasy of enthusiasm and wild rush of the whirlwind of inspiration, in the course of which they proceed to establish universal Conscription, to increase the Navy Estimates, to insist on everybody going about armed to the teeth and on all the frontiers bristling with artillery; the proceedings concluded with the singing of 'Boys of the Bulldog Breed' and 'Don't let them scrap the British Navy.' That is something like a fair parallel to the theory of these critics; that the transition from their idea of Jesus to their idea of Catholicism could have been made in the little upper room at Pentecost. Surely anybody's commonsense would tell him that enthusiasts who only met through their common enthusiasm for a leader whom they loved, would not instantly rush away to establish everything that he hated. No, if the 'ecclesiastical and dogmatic system' is as old as Pentecost it is as old as Christmas. If we trace it back to such very early Christians we must trace it back to Christ.

Science & Its Limits: The Natural Sciences in Christian Perspective by Del Ratzsch and No Final Conflict by Francis A. Schaeffer

I read both these books in preparation for a workshop that I ran at PYV Summer Camp on Science and Christianity. Ratzsch discusses the nature and limits of science, while Schaeffer looks at Genesis in the light of a belief in the inerrancy of Scripture.

I decided to read all four Sherlock Holmes novels as a way of preparing to see the recent movie. I had read A Study in Scarlet and The Hound of the Baskervilles a long, long time ago, but now I read The Sign of Four and The Valley of Fear for the first time. Exciting stuff.
Posted by John Dekker at 9:06 pm

Great list. Happy reading for the remainder of the month.

Thank you for reminding me, I must get around to reading Chesterton's The Everlasting Man.

This Doyle fan is glad to see you dipping into the Sherlockian canon :-)