Not your grandmother's theonomy

The Bounds of Love: An Introduction to God's Law of Liberty by Joel McDurmon 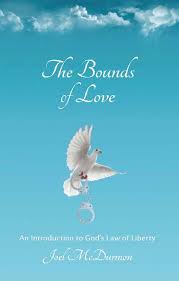 Although it's not really clear from the title, this book is about theonomy, which McDurmon defines as "the biblical teaching that Mosaic Law contains perpetual moral standards for living, including some civil laws, which remain obligatory for today" (p. 17).

In chapter 3, McDurmon argues that crimes relating to worship (e.g. idolatry and blasphemy) and sex (e.g. homosexuality and adultery) carried the death penalty in the Old Testament because of the concept of herem, in which things that could contaminate Israel needed to be destroyed. McDurmon argues that this no longer applies today. Although he isn't clear on this point, he seems to suggest that they should not even be crimes today (though of course, they are still sins). Later in the book he says that in a "properly theonomic society", the government "would have little to do with sex or marriage" (p. 94).

In chapter 4, McDurmon argues that all other Old Testament death penalties (e.g. for rape and kidnapping) still apply, on the basis that the penalties were an expression of God's perfect justice. Yet this does not sit easily with what was stated in the previous chapter: the death penalty for blasphemy was also a just one, yet McDurmon says it no longer applies. In any case, McDurmon's position represents a significant (and very conscious) departure from traditional theonomy.

Finally, with regards to practical application, McDurmon correctly notes that the Great Commission includes a command to disciple the nations, and teach God's law to entire societies rather than just individuals (p. 104). Yet it seems he has a defective view of discipleship. Discipleship, among other things, encourages inner conviction rather than just behaviour modification. That also applies in "teaching the nations". So when McDurmon says  that Christians "should always lead opposition to any and all taxation" (p. 112), one can't help but feel that he has misplaced priorities and is fighting the wrong battles.

The Bounds of Love is an interesting read but not really a book I would recommend.