A great introduction to some radical concepts 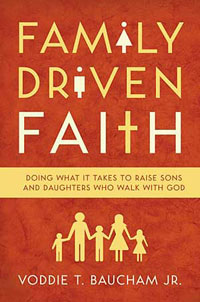 This is a book about family discipleship. It argues that parents (and fathers in particular) can and should disciple their children. In explaining this concept, Baucham discusses family education (homeschooling), family worship, and family-integrated churches. These are closely connected, of course, and Baucham notes that "families who have decided to shoulder the responsibility for their children's education find it refreshing that a church would expect them to do the same in the area of discipleship" (p. 201).

Homeschooling would be the most familiar of these items to evangelical Christians today, and Baucham uses the usual arguments - "there is a big difference between sending fully trained disciples into enemy territory and sending recruits to our enemy's training camp" (p. 128).

Family worship is also familiar to many Presbyterians who hold the Catechisms of the Westminster Assembly in high esteem, along with its Directory for Family Worship. My own denomination holds a Catechism Exam each year, with generous prizes. Yet I suspect very few households practice regular family worship of any sort, and Baucham has put his finger on an important area of reformation.

The concept of a family-integrated church would be unfamiliar to most Australian Christians. The U.S.-based National Center for Family-Integrated Churches is, however, hosting seminars in Australia next month, so if you live in Melbourne, Sydney, or Hobart, you have a great opportunity to learn more about it. Family-integrated churches insist on children staying with their parents in worship services, and usually reject youth groups and other age-segregated activities. The former issue is often discussed by Presbyterians here in Australia, but the existence of youth groups (for churches lucky enough to have youth) is usually taken for granted.

Baucham asserts that, "Contrary to popular belief, the home, not the church, has been entrusted with the primary responsibility of teaching children the Bible" (p. 95). He notes that he has "never had a conversation with a person presenting the argument for segregated youth/children's ministry from an open Bible" (p. 185), which is rather sad. Of course, Baucham is writing from a Reformed Baptist perspective, and he and I would, I think, have different views of the status of children in the church. He notes that church leaders should equip parents to teach their kids, since "the job of the church is to equip the saints to do their jobs, not to do it for them" (p. 186). The thing is, I believe that children are also saints. Children are directly addressed in the New Testament - for example, "Children, obey your parents in the Lord, for this is right" (Eph. 6:1). The fact that it says "obey", rather than simply "honour" indicates that it is not merely adult children who are being addressed. Since the NT epistles were written to be read out in churches, we can indeed conclude that children were assumed to be present in church. But the fact that they are addressed (and that it doesn't say, "Fathers, train your children to obey you") indicates that children are proper objects of the church's pastoral ministry. As a pastor, I can address children directly, and my teaching does not necessarily have to be mediated through their parents.The children of believers are, after all, full members of the church. There is no associate membership in the church of Jesus Christ.

Baucham includes an interesting list of criteria he used in choosing a church: a Southern Baptist, elder-led, family-integrated church which practiced church discipline and verse-by-verse systematic exposition, and which believed in church-planting (p. 175). It's not clear whether this is an exhaustive list, since it omits being Reformed (although Baucham is a card-carrying Calvinist) or being gospel-centred. But in seeking to promote the things he describes in this book, Baucham is advocating a return not just to the Bible, but also to Reformation teaching and practice.

Oh, and out of interest - Voddie Baucham is black. Not that he ever mentions it in the book.
Posted by John Dekker at 10:01 am