An excellent story of fatherhood, resurrection and return 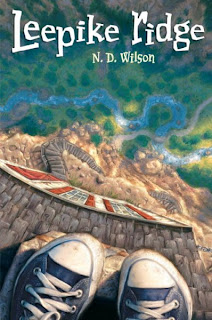 This is N. D. Wilson's first novel, but I had already read all his other books. There have been three in the 100 Cupboards series, and two (so far) in the Ashtown Burials series. In fact, Kara and I both read all those books last year.

Leepike Ridge is different. While the other books are all fantasy novels, this is fairly straight adventure. One notices the similarities, of course. The protagonist, Tom, is an eleven-year old boy (Wilson uses twelve-year-old boys in his other novels), and the theme of fatherhood is prominent throughout. (I'm sure we don't need to psychologize here; Wilson appears to have an excellent relationship with his father, Douglas Wilson).

Like all N.D. Wilson's books, Leepike Ridge is a thoroughly Christian novel. Tom travels deep underground, and then surfaces again. Wilson makes the connection with Jesus' burial and resurrection obvious (perhaps a bit too obvious) - the relevant chapter is entitled "Easter". Of course, it's not just a parallel with the story of Jesus (and Tom is not portrayed as a "Christ figure") - rather, this is the story of the Christian life, "We were buried therefore with him by baptism into death, in order that, just as Christ was raised from the dead by the glory of the Father, we too might walk in newness of life" (Romans 6:4). In any case, the metaphor works well in this book. And although I haven't read it closely, and can't be sure of the chronology, I wouldn't be surprised if Tom rises again on the third day.

Another theme of the book is that of return. It felt like the book was an exposition of that wonderful T. S. Eliot quote: "We shall not cease from exploration. And the end of all our exploring will be to arrive where we started and know the place for the first time."

Finally, Leepike Ridge makes some interesting connections with fringe theories concerning the discovery of America. Tom discovers artefacts that might be Chinese or Phoenician. The Chinese theory is the one made famous by Gavin Menzies' 1421: The Year China Discovered America (which I still haven't got around to reading) and Admiral Cheng is mentioned by name in the book. The Phoenician theory is less well known, but the book inspired me to research it and start a Wikipedia article on the Theory of Phoenician discovery of the Americas. I should point out, however, that Wilson says in an Author's Note that Leepike Ridge "does not draw inspiration from any historical evidence that proto-Chinese explorers reached the New World. Rather, it draws inspiration from a much broader pattern..."
Posted by John Dekker at 10:58 am