I wrote similar lists in 2010 and 2011, although last year I managed only twelve books on my list. The Ink Slinger and Money-Saving Mom also have good lists. 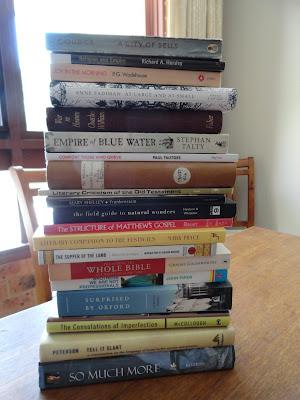 Kara really likes Goudge, and recently re-read this novel. I really enjoyed the excerpts she read to me.

This is one of the fifteen Jeeves books in the Wodehouse canon, and will be the ninth one I've read.

One of many books on my shelves that I've been meaning to read for ages.

Along with Lewis and Tolkien, Williams was one of the so-called Inklings, but his work hasn't achieved the fame of some of his colleagues.


It's my opinion that the recent trend of literary approaches to the Old Testament has been generally helpful. This is an older book, however, and still caught up in source criticism.

Religion and Empire: People, Power, and the Life of the Spirit by Richard A. Horsley 29th May - 4th June

This isn't quite a biblical studies book - instead, it looks at an issue that forms an important part of the historical and cultural background of the New Testament: imperial religion. The early Christians understood that Caesar's claim to be Lord was a religious one, and incompatible with Jesus' lordship.

This book was controversial in its day, and has become a classic in reformed theology.


I have been preaching through Matthew off and on for the past three years, and have got up to Matthew 15. For a long time I've been interested in the structure of Matthew's gospel, particularly whether it can be regarded as a covenant document. It doesn't seem to address the issue directly, but maybe this book can help me think through this.

This will be the fourth book I will have read in the Ministering the Master's Way series. The last one was on handling a new call.

I think that Goldsworthy's Gospel and Kingdom is a modern classic, and I am in fundamental agreement with his approach to the Old Testament. This looks like it will be a helpful book.

Tell it Slant: A Conversation on the Language of Jesus in His Stories and Prayers by Eugene Peterson 21st October - 20th November

This is the fourth volume in Peterson's "spiritual theology" series. I read the first two, and skipped the third. They don't seem quite as good as his books on pastoral theology, but Peterson is usually insightful.

Brothers, We Are Not Professionals: A Plea to Pastors for Radical Ministry by John Piper 22nd January - 24th February

My friend Mark Smith reviewed this book several years ago, but I never got around to reading it myself.


This book mostly contains hymns and poems by great saints of old, arranged according the day of their commemoration. It starts tomorrow with Saint Gregory of Nazianzus, and his "Hymn to God".

So Much More: The Remarkable Influence of Visionary Daughters on the Kingdom of God by Anna Sofia and Elizabeth Botkin 27th January - 8th March

This book has received ridiculously polarised reviews on Amazon. I wonder what the fuss is all about.

Surprised by Oxford by Carolyn Weber 12th March - 15th April
Kara reviewed this book after receiving a copy through Booksneeze, and my brother Tony has also read it.

The Supper of the Lamb: A Culinary Reflection by Robert Farrar Capon 25th May - 30th June

This is another book that Kara has already read, and thoroughly enjoyed.

This will come in handy when we teach Galilee natural history.

At Large and At Small: Confessions of a Literary Hedonist by Anne Fadiman 4th - 25th May

I loved this author's book Ex Libris, which I read several years ago. This volume looks fun as well.
Posted by John Dekker at 12:43 pm

"War in Heaven" is one of the few Williams books I've read and one of the more accessible. I deeply enjoyed it! Though set in current times, there is true medieval flavour to it (unlike all those books set in medieval times that aren't at all medievally-flavoured).

"So Much More" is a book that's easy to misunderstand, which is why I think it gets such polarised reviews--and why whenever it comes up in conversation, some people tend to get a little red in the face. When I read it I had some serious reservations about it--even though when I read it I was inclined to view it favourably. It wasn't until after some months of thinking over it, reading what others had to say about it, and hearing more resources from the authors and their family, that I realised it's not intended to be as legalistic as it comes across as being. But before I say more, perhaps I'd better dig out my old review of it and post it somewhere. Happy reading!