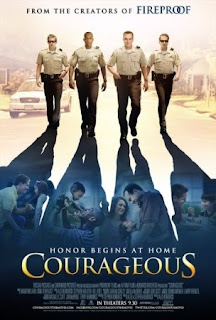 This afternoon I went to a preview screening of Courageous. It is an inspiring movie about fatherhood.

Courageous has a very limited screening in Australia, which isn't surprising given that that it is made by American evangelicals. It is the first film by Sherwood Pictures that I have seen, having missed Flywheel, Fireproof and Facing the Giants. (I note in passing this is the first one that doesn't start with the letter "F".) The American nature of the film was immediately evident to me (it is set in Albany, Georgia) and it is is a thoroughly Christian movie, though not cheesy. But I don't think Australian audiences will warm to this film. For one thing, it's portrayal of masculinity is so foreign. It is all about men opening up to each other, sharing their feelings and asking others to keep them accountable. That is not something Australian men tend to do.

Courageous is emotionally intense, even to the point of making me wonder if the film-makers are being emotionally manipulative. It is also rather long. But I love the way they carry out character development through spiritual transformation. The film is basically about men stepping up to be better fathers. The way they do this may seem foreign to some, yet the people were on the whole quite realistic.

I enjoyed this film, particularly since I am a recent father. The sentiment I will remember is that it's not good enough just to be a good enough Dad.

thanks for the heads up, but perhaps a little more on what the film is about. Here is the summary from IMDB:
--
When a tragedy strikes close to home, four police officers struggle with their faith and their roles as husbands and fathers; together they make a decision that will change all of their lives.