The Liturgical Year: The Spiraling Adventure of the Spiritual Life by Joan Chittister 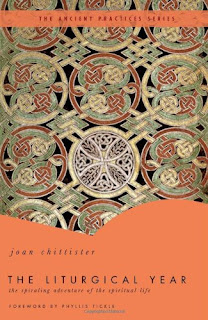 I received a review copy of this on Booksneeze, but I found it so bland, I have taken quite a long time to get around to reviewing it.

The goal of the book is worthy enough: it covers all the main points in the liturgical year, and explains what they mean for Christians. Chittister argues that the liturgical year reprises "those moments that are the substance of the faith" (p. 13). But what is the Christian faith? Chittister seems somewhat liberal on this point: "It was on the cross that Jesus, the new Moses, led the people through a desert of darkened understanding from one insight into the will of God for them to another" (p. 17). Very poetic, and picking up on an important New testament theme of Jesus being the New Moses and salvation being a New Exodus, but that is not why Jesus died.

This is a thoroughly Roman Catholic book, and as such puts more store in Church tradition than in biblical practice. Chittister acknowledges that "not all the feast days that accrued to the church calendar in early centuries were well-grounded spiritually or well-authenticated spiritually" (p. 29), but that doesn't seem to faze her. Her Catholicism also comes out in sentiments such as "Good Friday is the saddest day in the liturgical year" (p. 147).
Posted by John Dekker at 2:56 pm