My favourite commentary on Daniel 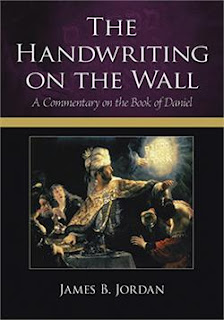 The Handwriting on the Wall: A Commentary on the Book of Daniel by James B. Jordan

I have been teaching on the Book of Daniel at PTC this semester, and this book has been very helpful in my preparation and study.

I first started reading Jordan about ten years ago. His biblical studies are always stimulating, often novel, sometimes rather weird. His Biblical Horizons newsletter is online, and I particularly recommend "Eldership and Maturity" (Parts 1 and 2) and "Concerning Colors, Architecture, and Sacraments."

In this commentary on Daniel, the most important thing is that Jordan takes the text seriously. This naturally leads him to take an early date for the book, and means that he has to part ways with the majority of scholars on various points of interpretation.

The most unusual contribution he makes to the study of the book is seeing King Herod at different points. This starts in the vision of the statue in chapter 2. The legs of the statue are iron, while the feet are iron and clay. The iron is traditionally taken to be Rome, which Jordan accepts, but whereas the iron + clay is usually interpreted as the declining Roman empire, Jordan takes it to be the mixture of Romans and Jews who sought to join Rome (p. 182), exemplified in Herod. That is, the iron and clay mixture is the one ruling Palestine in the first century, and so this explanation makes the best sense of Daniel 2:44, "In the time of those kings, the God of heaven will set up a kingdom that will never be destroyed."

The book contains some interesting appendices, one comparing Joseph and Daniel, and another (based on this article) suggesting that the words Jesus wrote in John 8:6 are the words mene, mene, tekel, parsin from Daniel 5:25.

The Handwriting on the Wall is my favourite commentary on the book of Daniel.

Wow, have you just given us the best bits or is it all like that?

No, there's a lot more interesting things in it - for example, he also attempts demonstrate how the book parallels the Ten Commandments. But I think the Herod connection was the most significant contribution Jordan makes to Daniel studies.

Anyway, for an introduction to Jordan's thinking I'd recommend the BH site.

I've just read his articles on eldership and maturity.

This sentence, amongst others, stood out: "Ordaining men in their 20s, 30s, or even 40s to the fullness of the ministry is a serious mistake."

Seems like Luke, me and you are all in trouble if JJ is right.