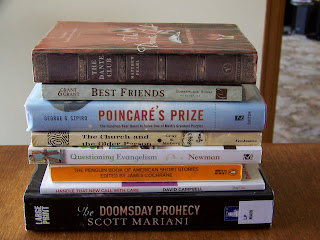 Another religious thriller for people (like me) who enjoyed The Da Vinci Code. This one is not anti-Christian, however, though it is anti-wacky fundamentalist. It features a character who is purportedly evangelical and yet claimed that the Apostle John had appeared to him to tell him that the events of the Book of Revelation were going to happen very soon. Not only does this betray a non-evangelical view of revelation (the concept not the book - it goes against what Packer calls the "evangelical equation": the Bible = the Word of God), but it also suggests a very Roman Catholic view of saints. And yet, it sounds awfully plausible given the current American evangelical scene.
Posted by John Dekker at 10:36 am

No overlap in our reading... unusual! But did you know that Natalie Merchant put together a great cd of songs ("meditations on childhood"), using classic children's poems for the lyrics, one of which is the blind men and the elephant. One of my favorites of that collection.