Jeeves in the Offing by P. G. Wodehouse

I enjoy all of Wodehouse's work, but Jeeves is the best. This novel was written in 1960, around forty years after the first Jeeves stories, and surprisingly, Bertie becomes friends with Sir Roderick Glossop. Apart from that, everyone is just the same.

A Million Miles in a Thousand Years by Donald Miller

This is the fourth book by Miller that I've read. It was a bit disappointing compared to Blue Like Jazz and Through Painted Deserts.

A Reformation Debate by Jacopo Sadoleto and John Calvin

In 1538, Calvin was asked to leave Geneva and moved to Strasbourg. The following year, Cardinal Sadoleto took the opportunity to write to the Genevans and urge them to return to the Catholic faith. Geneva then asked Calvin to write a response to this, and this slim volume contains both men's tracts.

The last line of this book is "I'll pray, and then I'll sleep." I read Gilead on Jean's recommendation. The narrator is a third generation preacher, who has experienced all the familial dysfunction that this entails. He comes from a fictional town in Iowa called "Gilead". This a lovely portrait of grace and forgiveness, and a book that I would particularly recommend to pastors. It won a Pulitzer, and looking at that list I think it's the first Pulitzer Prize-winning novel I've read. (I've read two such non-fiction books: Gödel, Escher, Bach and Guns, Germs, and Steel.) 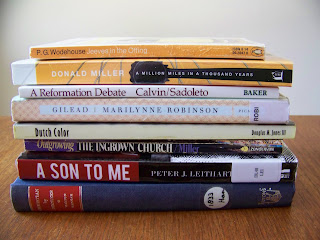 This is a good example of Christian historical fiction for children. I read it some years ago, and I thought I'd read it again after finishing Tulipomania. It's all about painting and tulips in the Dutch golden age. To be honest, though, it doesn't have the same magic it did the first time I read it.

This has been helpful, inspiring and challenging to me. It argues that every church ought to be a missionary church, explains what that looks like, and suggests steps towards gospel-centredness.

A Son to Me: An Exposition of 1 & 2 Samuel by Peter Leithart 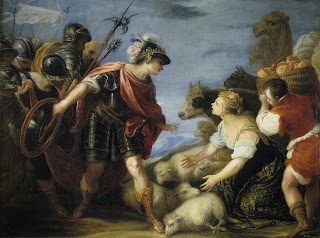 Many of you will know that I have started a Doctor of Theology degree at the Presbyterian Theological College. My thesis topic is "The Portrayal of Women in the Book of Samuel". This is a very helpful overview-style commentary on the book. Can you guess which woman is in this picture?

Christian by Degrees by Walton Hannah

I thought it was time to read up on the issue of Freemasonry. Hannah describes many masonic rituals in order to demonstrate their religious and quasi-Christian nature. Hannah argues that Freemasonry is an apostate Christian sect.
Posted by John Dekker at 6:07 pm

You may not be in a position to comment but I gather amoung the Tasmanian Anglicans, Freemasonry is spent force, is that so with Australian Presbyterianism?