G. K. Chesterton wrote around 4000 essays in his lifetime. This collection includes classics such as "On Gargoyles," "A Piece of Chalk" and "On Turnpikes and Medievalism".

Tulipomania: The Story of the World's Most Coveted Flower and the Extraordinary Passions it Aroused by Mike Dash 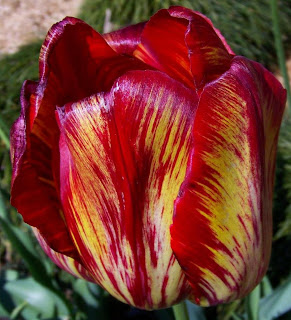 At the peak of tulip mania in February 1637, some single tulip bulbs sold for more than 10 times the annual income of a skilled craftsman. And then the bubble burst. The fact that this occurred during the Dutch Golden Age makes it all the more interesting.

I started reading this book in Canberra last month, and when I visited Sydney, I had to take some pictures of tulips in the Royal Botanic Gardens.

This is a discerning collection of literary quotes about food. Some are quite lengthy excepts from novels, such as this one from Alduous Huxley's Crome Yellow:

In the middle of a pleasantly sunny little room—'it is now Priscilla's boudoir,' Mr. Wimbush remarked parenthetically—stood a small circular table of mahogany. Crystal, porcelain, and silver,—all the shining apparatus of an elegant meal—were mirrored in its polished depths. The carcase of a cold chicken, a bowl of fruit, a great ham, deeply gashed to its heart of tenderest white and pink, the brown cannon ball of a cold plum-pudding, a slender Hock bottle, and a decanter of claret jostled one another for a place on this festive board.

This book is in the same genre as the Carl Trueman books I've read lately. Tinker writes in an irenic and polemic style on a number of doctrinal and practical issues - euthanasia, science, death, the Lord's Supper, territorial spirits, etc. The wikipedia article on that last mentioned topic needs more work, so I will probably add some quotes by Tinker when I've read his essay. 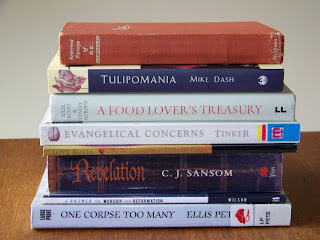 This is a series of short essays on each of the ten commandments, written by luminaries of the Presbyterian Church of Victoria. The title is delightfully ambiguous: does it refer to the rules of love, or is it telling us to have an affection for regulations, or is it saying that love is the best? 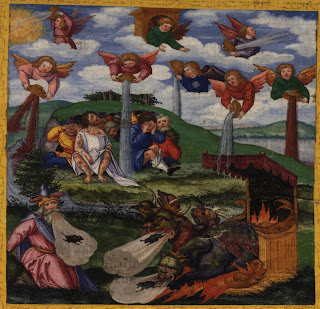 This is the fourth Shardlake novel, and a worthy successor to Dissolution and Dark Fire. Shardlake is a hunchbacked lawyer investigating murders in the time of Henry VIII. This time, all the murders are inspired by the seven bowls of Revelation 16.

Primer on Worship and Reformation by Douglas Wilson

Kara read this recently as well. It's a good summary of some of the ideas I've picked up from Wilson and friends - books like The Lord's Service and Deep Exegesis. Wilson's view of worship emphasises Psalm singing, expository preaching, rejoicing on the Sabbath and covenant renewal.

One Corpse Too Many by Ellis Peters

This book is evidently inspired by Chesterton's The Sign of the Broken Sword. The theme in both stories is that of a corpse being hidden in a battlefield. In Chesterton's story, Father Brown asks, "Where does a wise man hide a leaf? In the forest. But what does he do if there is no forest?" He answers his question by saying in an obscure voice, "He grows a forest to hide it in. A fearful sin." In fact, in The Sign of the Broken Sword, the murderer started a battle in order to cover his tracks. Peters uses the metaphor of the leaf also: Brother Cadfael says, "There is a murdered man among your executed men, a leaf hidden in your forest."
Posted by John Dekker at 3:57 pm

Boy you really do read widely!

Thanks for this update.