Women of the Old Testament by Abraham Kuyper

This was the first book published by Zondervan. It covers fifty women, including some fairly obscure ones such as the woman of Bahurim. Most of the devotions are fairly moralistic: in regards to the wife of Jeroboam, for example, Kuyper notes that what "the Scriptures intend to teach us by this episode" is that wives should not obey their husbands if they tell them to do evil.

Kuyper does make some use of biblical theology, though - in the chapter on Rebecca, he points out that in favouring Jacob over Esau, Rebecca is partly responsible for the enmity between Edom and Israel - an enmity that extends all the way down to Herod and Jesus.

And a number of the applications in this book are very perceptive. In discussing the Queen of Sheba, Kuyper suggests that 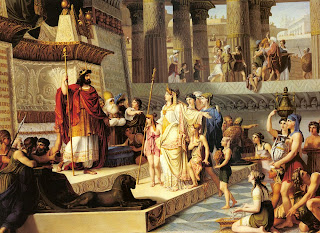 The Queen of Sheba was not much different from many of the young women of the higher classes among us today. They are eager to know everything.They have highly developed tastes... Had they lived in Solomon's day, they would certainly have made a trip to Jerusalem, just as they now travel to Paris and London, to Vienna and Berlin... Doubtless, they would have marveled in breath-taking bewonderment at the external beauty of the Temple at Jerusalem. But they forget one thing. They forget that a greater than Solomon is here. They forget that that greater One does not primarily ask them to appreciate the beauty of His word, but that he asks them for the surrender of their hearts... For that reason, these interesting and interested young women remain at the stage which the Queen of Sheba reached and go no farther. They come to Jerusalem. They are amazed and awe-struck. And they leave Jerusalem.

The Wisdom of Mr. Chesterton by Dave Armstrong and G. K. Chesterton, Theologian by Aidan Nichols

These two books were both published last year. I am reading them in preparation for a talk I am giving on Chesterton at St Joseph's Catholic Church, Chelsea on Thursday, 3rd September at 7:30pm. If you live in Melbourne, feel free to come along.

The Lost Symbol by Dan Brown

It always says something when the name of the author is much bigger than the title of the book. This is the third book in the Robert Langdon series, after The Da Vinci Code and Angels and Demons. Like the other two books, the front page of this novel contains a "Fact" section, this time asserting that "All rituals, science, artwork, and monuments in this novel are real." I don't know what "real" means in this context, but here is an example of a scientific statement in the book:

In 2001, in the hours following the horrifying events of September 11, the field of Noetic Science made a quantum leap forward. Four scientists discovered that as the frightened world came together and focused in shared grief on this single tragedy, the outputs of thirty-seven different Random Event Generators around the world suddenly became significantly less random.

This quote, on the other hand, is probably fictional rather than scientific:

Katherine had created beautifully symmetrical ice crystals by sending loving thoughts to a glass of water as it froze.

The Masters by C. P. Snow

C. P. Snow was a scientist who became a writer. This novel is set in an imaginary Cambridge college, and seems to be set around the intrigues within the faculty as they choose a new Master. 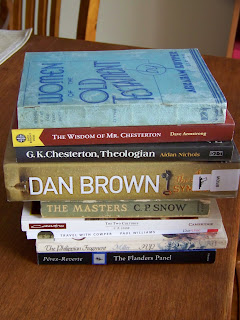 Being both a scientist and a novelist, Snow was aware of the divide that often exists between those in the science and those in the humanities - these are the "two cultures" to which the title of this 1959 lecture refers. The point Snow argues is that they don't usually understand each other, and are mutually ignorant of each other's work. He notes that not many in the "traditional culture" (i.e. the humanities) can describe the Second Law of Thermodynamics, but asking them to do so is, in fact, the scientific equivalent of asking "Have you read a work of Shakespeare's?"

The edition of the book that I read had fifty pages of the original lecture, plus seventy pages of introduction. But such an introduction is probably appropriate given the lecture's influence - it is, for example, included in this list of the hundred most influential books since the war. 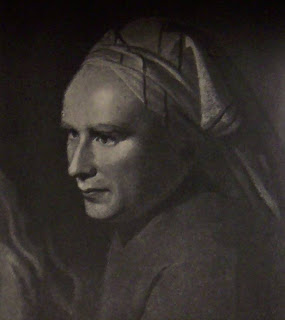 I have blogged about this series before, and this volume was similar to the ones I had read on John Knox and Robert Murray M'Cheyne. Cowper is best known for the hymns God moves in a mysterious way, O for a closer walk with God and There is a fountain filled with blood - but is also notable for his struggle with insanity and depression. He had a mental breakdown every ten years: in 1752, 1763 and 1773.

The Philippian Fragment by Calvin Miller

This book is a series of fictional letters from the second century. The author purports to be the pastor of the church at Philippi. There is a lot of pastoral wisdom here, though it gets rather silly at times.

The Flanders Panel by Arturo Pérez-Reverte

This was a rare re-reading. The Flanders Panel is a mystery novel about art and chess, and so it's right up my alley. It does, however, contain violence and sensuality, and so I am not recommending it here. One thing struck me as I read it again: not only is the painting in the story fictional, but it reflects an imaginative history of a non-existent country: the Duchy of Ostenburg, which is described as being somewhere between Luxembourg and Flanders. In fact, I only realised it was fictional when I tried to look it up on Wikipedia.
Posted by John Dekker at 12:44 pm