I am reading this book as part of discussion group with my fellow PTC graduates.

This is an informative book. Sproul is very critical of U.S. governmental policy, and accuses it of stealing, not so much through high taxation, but through currency devaluation and excessive borrowing. It's not quite as biblical as I would like: perhaps a better title would be Austrian Economics.

This is one of the classics in the field. I find the recent trend towards literary approaches in biblical studies to be quite satisfying.

The Book of Bebb by Frederick Buechner

This volume consists of a quartet of novels, the first three of which I read about ten years ago. I bought this book recently, and decided I wanted to re-read them all before I got to the one I haven't read yet. They are about a so-called evangelist named Leo Bebb, who runs a mail-order ordination business. Buechner describes his physical appearance in the following terms:

A workable, Tweedledum mouth with the lines at the corners, the hinge marks, making an almost perfect H with the tight lips. A face plump but firm, pale but not sick pale. He was high-polish bald and had hardly a trace of facial hair, beard or eyebrows even. The eyes were jazzy and wide open and expectant, as if he'd just pulled a rabbit out of a hat or was waiting for me to. 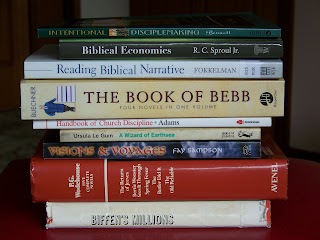 Handbook of Church Discipline: A Right and Privilege of Every Church Member by Jay Adams As the title suggests, this is a practical manual of the way in which biblical discipline should be carried out in the church. And as the subtitle indicates, the great theme of this book is that discipline is a blessing that we dare not withhold from God's people.

One of the unusual arguments in the book is that there is a difference between excommunication and "putting outside the fellowship". In the former, the offending party is still regarded as a brother, while in the latter situation, he is regarded as a "tax collector or sinner".

A Wizard of Earthsea by Ursula Le Guin

Another classic that for years I'd never got around to reading. Completely enchanting.

Visions & Voyages: The Story of Celtic Spirituality by Fay Sampson

This book's subtitle is a little misleading, as the book has much more to do with the history of Celtic Christianity than its "spirituality". But it contains a whole lot of great stories and fascinating characters.

Biffen's Millions and The Return of Jeeves by P. G. Wodehouse

These are both the U.S. titles. They were published in the U. K. under the titles Frozen Assets and Ring for Jeeves respectively. Light-hearted fun.
Posted by John Dekker at 6:17 am