Face to Face: Meditations on Friendship and Hospitality by Steve Wilkins

I'm reading this with Kara. We're both keen on extending our hospitality over the next few years, and hopefully this book will help us to think theologically about the subject.

I like usually to have a book of preaching on the go, and this is a good one. Most of the contributions come from Sydney Anglicans, but there are a few Presbyterians in it as well.

I've been preaching through 1 Samuel in our evening services at Aspendale, and this book has stimulated my thinking. Jobling provides us a good example of where liberal assumptions can take us in biblical interpretation - if the Bible is only a fallible record of human experience, there is no reason to believe it contains an accurate portrayal of God. Sure enough, Jobling believes that 1 Samuel portrays God as childish and irrational (p. 84). Despite this outrageous statement, Jobling raises some important questions that do need to be answered. For example, why does David remain king despite all his sin, whereas Saul is rejected after a trifling offence? Jobling puts it down to God's inconsistency, but there is a better explanation: the LORD made an everlasting covenant with David (2 Samuel 23:5), whereas he did not make one with Saul. All in all, this is a potentially dangerous book, and not one I can recommend to readers of this blog.

Teaching the Trivium: Christian Homeschooling in a Classical Style by Harvey and Laurie Bluedorn

This is a classic example of a controversial book. It has 29 reviews on Amazon: 17 give it five stars, while 10 give it 1 star.

Kara and I are planning to homeschool our kids, and this book looks like it's going to be very useful in helping us plan a curriculum. 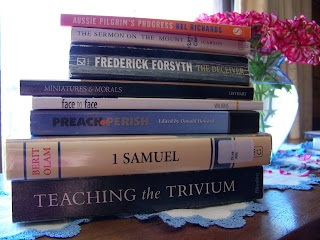 This book is almost better than the original. I avoided getting Richards' Aussie Bible, but at just $3 at Borders, this was too good to pass up. I read it to Kara, and had the dual pleasure of sharing a devotional book with her, and teaching her the Australian language.

At a couple of places, Richards makes some positive theological adjustments to Bunyan's text. In Hopeful's account of his conversion, Richards includes an explanation of the Big Swap. In the original version, Hopeful has to wait for Christ to reveal himself to him, which he does in a special revelation to his soul, but in Richards' version, all Hopeful (or "Trusty", as he is now) has to do is pray a short simple prayer and really mean it, and he has made the first step on a lifelong journey.

The Sermon on the Mount: An Evangelical Exposition of Matthew 5-7 by Don Carson

I've just finished preaching through these chapters in our morning services, and this book was quite helpful. Not Carson's best, (that would be A Call to Spiritual Reformation) but still very good.

The Deceiver by Frederick Forsyth

Another spy novel, better than the one I read last month.

Miniatures and Morals: The Christian Novels of Jane Austen by Peter Leithart

As the subtitle suggests, this book doesn't just look at Jane Austen from a Christian perspective - it actually argues that her novels are Christian. It has be admitted, however, that we don't know much about Austen's personal faith.

I must confess, I did not read all of this book - just the introductory chapter, and the two chapters on the two Jane Austen books I have read: Pride and Prejudice and Emma. But Leithart has encouraged me to keep on reading through the Austen corpus. Next stop: Mansfield Park, which Leithart claims is Austen's most theological novel.
Posted by John Dekker at 12:01 pm

Makes me wish I'd bought more radical commentaries, there's almost nothing more depressing then merriley reading along in an "evangelical" commentary and finding some nonsense, boring prose, unimaginative exegesis or even outright liberalism.

Luke and I went to Wayne Schuller's house, they sue a homeschooling program that i forget the title of, but the subtitle was 'The Classical education you never had'.

Their young child told me about emperor (?) clovis and showed me the flag she made with her mother with clovis's symbol around the border. It seemed very real to her!